Sources close to the Askia Sabur case have confirmed to us that the District Attorney’s office will file a motion tomorrow morning to bar the controversial video depicting Sabur’s beating by Philadelphia police officers. Jury selection is also expected to begin tomorrow and his trial likely to begin Wednesday.

Sabur’s defense team, when questioned about the DA’s motion, say they will fight it and that they do not expect the motion will succeed.

The Declaration will keep you updated as developments occur.

What was supposed to be a day for jury selection and a possible afternoon trial for Askia Sabur instead became fraught with frustration for Sabur’s family and defense team with Judge Christopher Wogan’s unexpected absence, reportedly due to illness.

Word spread quickly among assembled family members that the prosecutor was attempting to delay the start date for the trial to November. Sabur has been in pre-trial detention at Montgomery County Correctional Facility since September of 2010, which, according to what some legal experts tell me, is uncommonly long for a non-homicide case.

Tanya Yates, Sabur’s cousin, was expected to stand trial with him, but was offered the Accelerated Misdemeanor Program (AMP), which allows her to avoid trial in exchange for community service. Yates’ charges stem from a 2010 incident in which police raided her home, allegedly looking for a suspect. The raid took place shortly after Sabur’s arrest, and the family contends it was in retaliation for a number of community protests outside the neighborhood police precinct, following his beating at the hands of 19th District officers.

Following the beating depicted in the above video, Sabur was taken to Mercy Hospital where he received six head staples, a neck brace, and treatment for a fractured left arm and multiple back injuries. 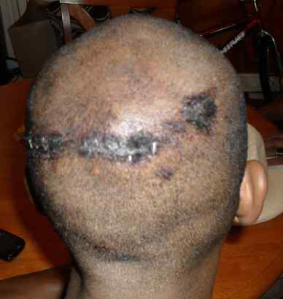 After some legal maneuvering from Evan Hughes and Larry Krasner, Sabur’s defense team, his next trial date is scheduled for February 13th. Considering how long Sabur’s defense has been preparing for trial since his 2010 arrest, however, there is a possibility that they will attempt to move forward with an earlier court date.

Check out Declaration coverage of Sabur’s trial from earlier this week, which includes Judge Wogan’s threat to issue a bench warrant for Officer Jimmy Leocal who failed to appear for a preliminary hearing in 2010. As a result of his absence, Sabur’s aggravated assault charge was dropped.

We will continue to bring you updates on this trial.