A batch of Freedom of Information Act (FOIA) documents received by The Declaration’s Joanne Michele pertaining to the National Park Service’s (NPS) preparation ahead of last year’s Occupy National Gathering in Philadelphia provides a glimpse into the national security state’s ineffective intelligence gathering, the National Park Service’s disregard for taxpayer money, as well as continued secrecy on the part of both local and federal authorities. Perhaps most importantly, the documents contribute to ongoing revelations reported from other media outlets regarding the monitoring of journalists and activists who peacefully seek to express First Amendment rights guaranteed them under the U.S. Constitution.

Editors’ Note: The documents in their entirety are embedded at the end of this post and can also be viewed on our Scribd.

The NPS FOIA release reveals continued secrecy on the part of officials in the form of completely redacted pages, partial redactions (or blackouts) and the unexplained absence of 97 pages.

The NPS states in an early response: “A preliminary search of our files indicates that there are approximately 310 pages of documents related to your request.” Of those 310 pages, Independence National Historic Park released only 213 pages, leaving 97 pages missing entirely and with no clear explanation given. The NPS notes that this can be considered a partial denial and open to appeal.

Twenty-two pages were withheld under exemption (7)(e), which covers information compiled for law enforcement purposes, the release of which would disclose techniques, procedures, or guidelines for investigations or prosecutions, and a further twenty were heavily redacted (we consider this to be redaction to an extent that renders the page unreadable or incomprehensible). Additional portions were redacted under exemption (6) (a personnel, medical, or similar file the release of which would constitute a clearly unwarranted invasion of personal privacy) or exemption (7), with no further specification given. It could include anything from information that could interfere with law enforcement proceedings to the disclosure of informants’ identities.

The documents also include a screenshot of a post to Joanne Michele’s blog announcing this request itself, as well as a tweet from Dustin Slaughter announcing his own request to the City of Philadelphia. 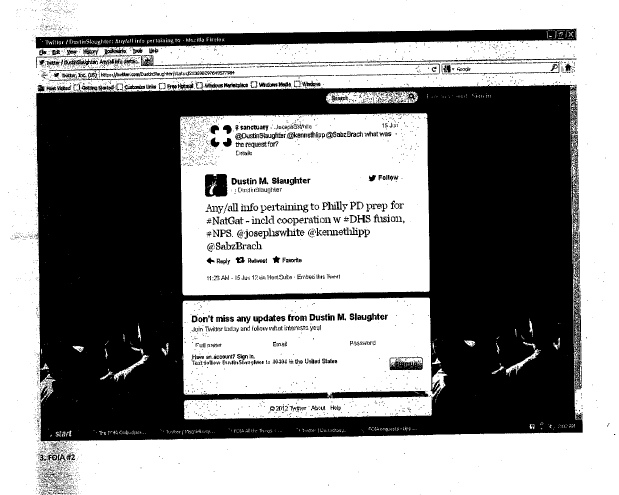 Clearly, the authorities regard the public’s desire to know how law enforcement responds to activities protected by the First Amendment as a threat which warrants inclusion in an intelligence report. In other words, a challenge to secrecy in itself is considered a threat to law and order.

Pages 86-117 (10% of the documents released) reveal initial confusion between the National Park Service and the Philadelphia Police Department regarding enforcement and jurisdiction over Washington Square Park. During this time, PPD requested NPS clarification over their concurrent jurisdiction, which was eventually met with the Memorandum of Understanding between the Department of the Interior and the City of Philadelphia through the Fairmount Park Commission.

Lackluster Intelligence and the Use of OSINT

Open-source intelligence, or OSINT, is based on publicly-available information – primarily tweets and Facebook posts. It is a controversial and ineffectual surveillance gathering tool.

This is made evident by the nearly complete absence of any reference to actual National Gathering organizers. One, who wishes to remain anonymous, says of the FOIA release:

It’s hard to know how good their intelligence is because so much is blacked out. But as it stands right now, it looks like total shit.

The NPS appears to have been heavily reliant on this method, made evident in the significant inclusion of Kenneth Lipp’s tweets, some of which are entirely ambiguous pieces of information. One example of this is a tweet posted by Lipp that merely says:

“It was just to see how authorities would respond,” says Lipp.

The NPS was also concerned with the possibility of “black bloc” actions during the National Gathering, apparently based on more of Lipp’s tweets.

“I was simply weighing in on a debate Anons (Anonymous) were having online, one which was starting to annoy me.” 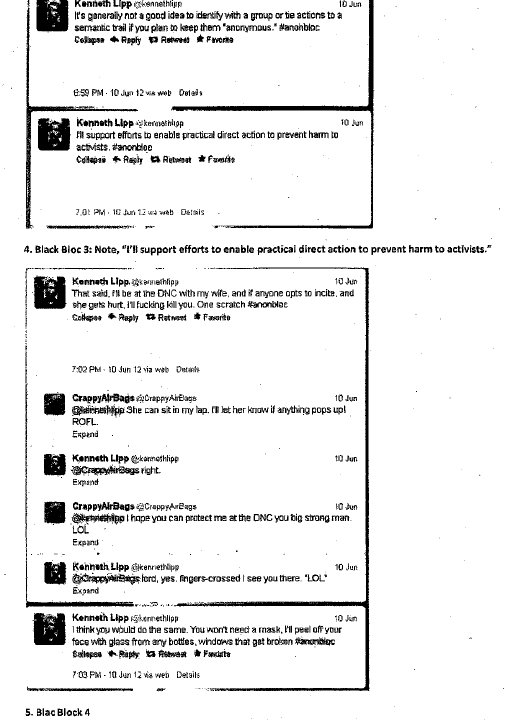 While Lipp believes there have been successful uses of the Black Bloc tactic, these uses would fall under defensive tactics (i.e. shielding protesters from mounted police units). He is also quick to point out that the Twitter discussion focused on the Democratic National Convention and had nothing to do with the National Gathering, which the tweets clearly confirm.

“It was really kind of expected,” he says, adding that the National Park Service deliberately mis-characterized the content of his tweets.

Another example of puzzling scrutiny is a line from June 5 stating that “Numerous members of TOYM [our journalism collective, the name of which existed at that time largely as a joke], many of whom are leaders/organizers of the National Gathering, are currently at Ft. Meade for a Bradley Manning rally.” (pg. 153) In fact, we did not attend the vigil itself; we attended the hearing as members of the public but with the stated intention of reporting on the proceedings as we had done previously. Nothing in the communication indicates why the NPS believed it important to report on journalists’ attendance at the Manning hearing.

There are also questionable conclusions drawn, we believe, to justify an Application for Emergency Law and Order Funding by Superintendent of Independence National Historic Park Cynthia MacLeod. In it, she cites intelligence received from online sources as well as the Philadelphia Police Department indicating the Occupy movement had recently “embraced more confrontational tactics” and “tweeted its desire to disrupt events and force confrontations with law enforcement.”

Furthermore, the application connects the group anticipated to attend the National Gathering with “groups that clashed with the Chicago Police [in May 2012] during the economic summit.” Clashing with law enforcement may not be enough to justify a $120,000 funding request, so the application makes a point to note, “3 persons were charged with terrorism violations for allegedly planning on creating Molotov cocktails” in Chicago.

67 members of the Philadelphia Police Department, including at least one high-ranking officer, were present for mutual assistance with the Chicago Police Department and other law enforcement agencies during protests at the NATO summit in May 2012. The only people included in the unredacted portions of the intelligence reports from US Park Ranger Layla Schade to her superiors are Tim Kyle, Kenneth Lipp, Dustin Slaughter and Joanne Michele, who reported live from the NATO protests.

We believe those preparing National Gathering intelligence intended to draw a connection between alleged plans for violence in Chicago with activists and journalists involved in the National Gathering in order to justify requests for increased dedication of law enforcement resources, including Emergency Law and Order Funding which we explore below.

Although the redacted portions of the FOIA release make it impossible to know for sure, it is apparent that NPS National Gathering intelligence reports, compiled by a ranger one year out of college, are also reliant on publicly available information that is taken at face value. The redacted portions are done so under exemption (7)(e), which relates to law enforcement procedure, giving us no reason to believe they contain more actionable intelligence. Open-source intelligence is of questionable value within the intelligence community even as its popularity increases due to funding cuts and continued outsourcing to private contractors.

Last month, The Declaration wrote a story which highlighted an October 2012 report by the bi-partisan Senate Permanent Subcommittee on Investigations. The report found that DHS fusion centers, which were created under the Bush administration and both expanded and handsomely funded under Obama, produced reports that not only failed to even contribute to disrupting terrorist plots but also endangered citizens’ privacy rights. Intelligence reports from these centers is “oftentimes shoddy, rarely timely, sometimes endangering citizens’ civil liberties and Privacy Act protections, occasionally taken from already-published public sources, and more often than not unrelated to terrorism.”

We believe that all of this also points to the surveillance or monitoring of journalists and activists for the purpose of suppressing First Amendment dissent. The emails suggest NPS was more concerned with how many people would be attending the National Gathering than protecting the Constitutional rights that were the purpose of the convergence. The First Amendment right to assembly is never mentioned with regard to Occupy activists except when used as justification to limit their rights in favor of those who filed permits and as an excuse to heavily monitor them at taxpayer expense.

On May 31, Independence National Historic Park requested and was granted an Emergency Law and Order (ELO) account to cover anticipated costs from June 30 to July 5, which they estimated in May to be at least $120,000 as well as assistance from other areas and the NER SET team (page 124). The NPS appears to have initially faced difficulty in obtaining the requested 10 additional park police from other locations. A June 19 email from Chief Ranger Patrick Suddath to USPP Captain G. William (Bill) Davis suggests Suddath may fail to understand the financial situation of this country. “I am also a little unclear why WASO (Washington Support Office) was so adverse to bringing in the Alaska SET Team. I’m guessing that the difference in travel between Alaska and NER SET (Northeast Region Special Event Team) may be about $1500 a person.”

Given our discovery of the Department of Justice’s involvement with the NPS, at least in an advisory capacity, we intend to a file a FOIA with that agency. We will additionally be appealing for the redacted portions of this request.

The Philadelphia Police Department denied Dustin Slaughter’s June 2012 request, based on their claim that they had no relevant documentation pertaining to preparation for the National Gathering. Emails between the NPS and the PPD in this release, however, show otherwise. Dustin Slaughter is currently awaiting response to a second Right to Know request regarding their involvement in National Gathering. 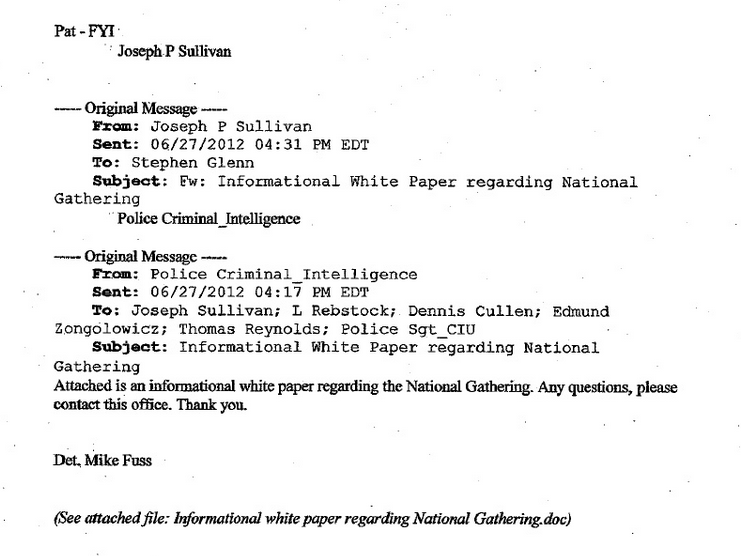