With the return of Smokedown Prohibition scheduled for April 20, Easter Sunday, at Independence Mall, two moves by Federal authorities in recent weeks demonstrate their concern over the civil disobedience action, and their desire and willingness to discourage attendance at the demonstration, past iterations of which have brought hundreds to the First Amendment monument to simultaneously smoke cannabis to protest its criminalization. 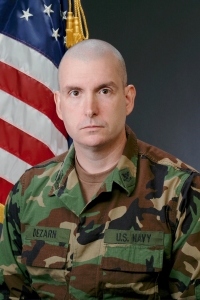 Don DeZarn, US Navy veteran of Operation Iraqi Freedom, from his campaign webpage

Last month a judge of the Eastern District of Pennsylvania had strong words of rebuke to accompany relatively harsh sentences handed to activists Chris Goldstein and Donald Dezarn. He ordered both men to serve two years on probation and to pay $3035, with a court fee of $35 which the judge stipulated must be paid before the men were allowed to leave the building. He also ordered the balance, a $3000 fine, be paid within 30 days. 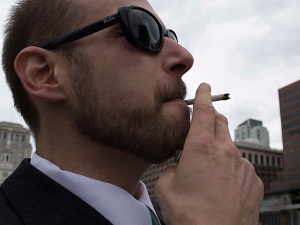 The sentence given to Nikki Allen Poe in December of last year stemming from his own participation in Smokedown, for interference with agency function, disorderly conduct, and possession of a controlled substance, was relatively light, considering that DeZarn and Goldstein were both only charged with two misdemeanor possession counts, and neither were taken into custody and held in Federal detention at the time of the offense, as was Poe. The judge ordered Poe to pay just under $800 dollars and to serve a year of probation.

The judge’s message to defendants Goldstein and DeZarn about the irrelevance of the 1st Amendment to their crimes, and the court-prescribed limitations on their further participation in Smokedown , also stood in stark contrast to the sentencing statement to Poe, where the judge told perennial protest prosecutor Richard Goldberg “I know that he has probably been a thorn in the side of law enforcement as well as the US Attorney’s office for some time, but that’s not a criminal act in itself, that’s something you have to deal with.”

Contrarily, after Goldstein delivered a passionate justification and plea for leniency from the court, Judge Hart directly responded to his statements by rejecting that the circumstances had anything to do with the 1st Amendment, and compared his and Dezarn’s chosen mode of protest to a group of lead-footed drivers who decide to collectively drive 75 mph to protest the 55 mph limit (an equivocation this writer does not feel should be necessary to dissect for the reader). He warned DeZarn and Goldstein that if he was told that they were in attendance at Smokedown and anyone was arrested for smoking marijuana, he would likely react to such reports by incarcerating them.

Now the United States probation office, stating Poe’s engagement in conduct explicitly allowed by the court at sentencing as cause, are seeking to modify the terms of Nikki Allen Poe’s probation to preclude his association with multiple persons, many never convicted of any crime in any jurisdiction and including his girlfriend with whom he lives. They are also seeking to bar Poe from posting anything to the Facebook page which he created, The Panic Hour, from posting anything about Smokedown Prohibition irrespective of whether he advocates criminal conduct, and from associating with any organization or person that falls under the umbrella of one that “advocates illegal activity” (which been repeatedly found to be protected by the 1st Amendment, about which Assistant US Attorney Goldberg seems to feel tepidly at best). 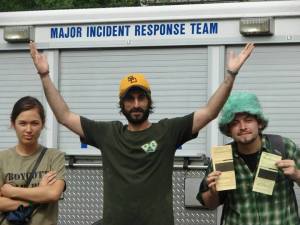 Standing at a distance, Poe observes Smokedown 6. He is clearly bearded, suggesting that his appearance in court may have been altered by a razor.

Smokedown Prohibition is April 20 at Independence Mall, with a start time of 4:00 pm.

Nikki Allen Poe announced this week that he was the Libertarian candidate in Philly’s upcoming special election for City Council.