Recent organizing and demonstrations around the issue of police accountability in Philly, set in motion by grand jury decisions in Ferguson, MO and Staten Island, NY not to indict police officers who gunned down unarmed African American men, have taken a new, though rather historically familiar, twist.

Laura Krasovitzky, a University of Pennsylvania student organizer, tells The Declaration that she was visited on the morning of December 8th by a Philadelphia Police Department detective, who she soon learned was in the Homeland Security Bureau, asking about posts in a Facebook group.

“The detective told me he was there because of specific language I used in the notes I posted on the ‘Ferguson to Philly’ Facebook group after the town hall meeting of Dec. 2. He had the notes printed out,” Krasovitzky says.

Krasovitzky, who says she is active in several causes but has been mostly focused on work with Students Organizing for Unity and Liberation (SOUL), which has been heavily engaged in actions responding to both the Ferguson and Staten Island non-indictments. SOUL staged a die-in attended by hundreds last week, and was represented at a December 2 town hall meeting held by community organizers in response to the verdicts. That community forum produced a list of “movement demands” – and language contained in that list brought Detective Ray Rycek to her dorm room at 11:00 AM.

He wanted to know about language in the notes which Krasovitzky had posted to the page, notes the student organizer had collected from various participants in a related working group from the Calvary meeting, she says, which described “targeting” the Christmas Village at Love Park, “targeting” disgraced and rehired Philly cop Jonathan Josey, and “targeting” Commissioner Charles Ramsey in an upcoming protest action. The Dignitary Protection Division detective told Krasovitzky that this was considered threatening, and questioned her regarding any plans for violence against the Commissioner or other persons.

Before eventually asking if she was being detained and upon being answered in the negative stating that she had nothing further to say, she completed a form which the detective had brought with him, containing Krasovitzky’s personal information, including her address and date-of-birth. On the form, in which she responded to concerns over “notes posted…in regards to targeting abusive cops (e.g., Jonathan Josey), Charles Ramsey…and the Christmas Village,” the Penn senior and prolific activist was quoted by the detective:

“We are peaceful. We would not harm the Police Commissioner, visitors of the Christmas Village, or abusive cops. I have nothing further to say.”

She refused to sign the form but says the detective told her she could take a photograph of the document, which she shared with The Declaration. You can view a copy redacted for her privacy by clicking the thumbnail below. 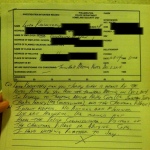 The Declaration learned of the interview via a representative of Philadelphia IAC, an initiating organization with the Ferguson to Philly Emergency Response Network, which released a statement regarding other police responses to the same December 2nd town hall meeting in West Philly. According to Philly IAC’s statement, the day after the event held at Calvary United Methodist Church, an unidentified member of the Philadelphia Police contacted the church’s sexton and complained about the meeting and “red-baited” organizers, telling sexton Ed Fell they were communists.

Krasovitzky said she was rattled by the visit from law enforcement, and reluctant to speak about it until friends encouraged her to go public.

“This is clearly full intimidation, it’s what they do,” she said in an interview last night.

She is seeking answers from the university regarding what policies allowed the detective to be given access to the private facility to reach her dorm room.

A senior police department official has not yet responded to our inquiry regarding this matter.

Editor’s note: A correction has been made to this piece: PURP did not release the statement in response to PPD Homeland’s visit to Krasovitzky; Philly IAC did. We apologize for the error.