Assume that Kenneth is behind the wheel until Wednesday.

Frankly I felt like the only thing for me to do was to offer a critical view from as many angles as possible, to pick on Kenney, and to contrast him with a reasonable alternative

I’ve interviewed Doug Oliver twice in two weeks, some of the second interview is cut into the video below. I wrote a non-endorsement endorsement of Oliver for The Spirit encouraging people to reconsider any decision already made about their vote.

My goal here is NOT an endorsement – there are ideological and practical reasons, but mostly the Declaration’s editors don’t much see the point. Job number one is to connect the record from the campaign and the past to inform voters, and job number two is to divorce individual decision-making from publicized predictions of the election’s outcome.

I want to ask some pointed questions of Mr. Kenney and highlight some of the troubling aspects of exponential political ascent.

Not like we believe it will make much difference – I largely have the wheel because my co-editor Dustin closed his eyes miles ago with instructions to tell him when we reached May 20th – and it’s not like we’re the Inky or Philly Mag, whose dueling and diluted endorsements of Williams and Kenney, respectively, basically cancelled one another out.

But no one else seems willing to stick to Kenney hard on some big questions. There are at least two elephants in the room named John, and I want to spend time talking about both. I’ll be doing that over the next 24 hours or so. I’m not going after Kenney because I think he is the worst option, but I also think that expecting to combine progress/reform by an entente of the establishment is foolhardy. 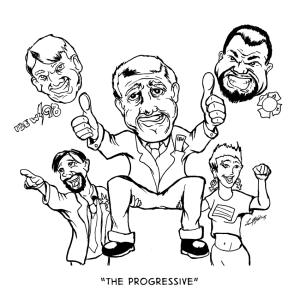 And I think some are avoiding too critical a voice regarding the former Councilman Kenney, assuming he will soon be Mayor.

I won’t exclusively criticize Kenney, or promote only Oliver’s positive points. Everyone gets a turn. But yes, I’m picking on Kenney, and I assume he can take it. If polls are to be believed, he’s the 43% man.

At the forum The Declaration held with Techbook Online – Transparency Now: The Philadelphia Mayoral Forum on Police and Criminal Justice Reform, late last month – Mr. Oliver was joined by all 5 candidates agreeing in-turn to commit to “ending stop-and-frisk” by the Philly Police if elected. But the 40-year-old former PGW executive was alone, I felt, in demonstrating that he understood the nature of the problem. Oliver said that “ending stop and frisk” would be of little use if it we failed to change the culture behind it.

With the exception of Mr. Milton Street, who is unmatched in providing baffling comment, Oliver is the only candidate who has tried for the right answer, even if not the safe one.

He told me he knew he’d misspoken as soon as the words ” the have good reason to fear black men…” left his mouth a few weeks ago at a forum held by Al Dia.

When someone says Oliver is promising but too inexperienced – maybe in 4 or 8 years – it amounts to saying that no one is ready for public office that has not bought into the political establishment. Do we really want to wait until he owes something to the right people before we elect Oliver?

We have many seemingly intractable problem features in Philly government, but we have not been plagued by a lack of experienced professional politicians.

As I continue to provide reasonable doubt for Mr. Kenney, I’ll also try to make an affirmative case for voting Doug Oliver Democratic candidate for mayor of Philadelphia (easy to forget there is still a general election to come).