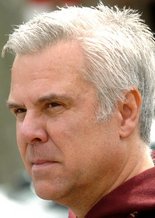 While they don’t mention him by name, CBS Philly reports that George Norcross, a South Jersey political boss (who may very well be behind efforts to destroy Camden’s police union), and owner of the majority of our city’s newspapers, is threatening to shut down the Philadelphia Inquirer and Philly Daily News if the Newspaper Guild doesn’t accept cutbacks. Norcross’ ownership monopoly on Philadelphia news weighed heavily on our decision to begin this publication, in case you were wondering.

Pennsylvania police unveil their new “See Something, Say Something” app for the iPhone and Android, WHYY Newsworks reports. The app will feed threat information to the Pennsylvania Criminal Intelligence Center.

Mayor Michael Nutter calls the National Rifle Association “out of touch” on gun control issues. “Not even the insane people at the NRA can put forward a legitimate explanation” for not limiting assault weapon ownership, CBS Philly quotes Nutter as saying.

The Philadelphia Historical Commission says that demolition of the historic Church of the Assumption can move forward, The Inquirer reports.