This morning the Massachusetts Institute of Technology ‘s The Tech reports that computer pioneer and technology activist Aaron H. Swartz committed suicide yesterday in New York City, at the age of twenty six. 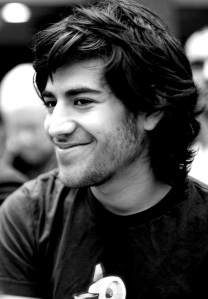 Brilliantly gifted (he helped develop the widely-implemented RSS 1.0 specification at the age of 14), Swartz entered the mainstream spotlight in July of 2011 when he was arrested for allegedly stealing over 4 million online documents from MIT and academic publishing repository JSTOR.

Swartz also co-founded the hugely popular Reddit, and in response to legislative attempts to regulate the internet, SOPA and PIPA, he founded demandprogress.org to combat internet censorship.

Though neither JSTOR nor MIT wished to see Mr. Swartz prosecuted, US authorities proceeded on their own volition.

The Declaration joins millions of citizens in mourning the tragic, unnecessary death of this brilliant young man, his promising life seemingly cut short by a Federal witch hunt against online activists.

Online activist Asher Wolf posted a poignant tribute to Aaron, which elucidates the grave issues his case and death constitute.

From “In memory of Aaron Swartz”

And they must be fought.

The U.S. Department of Justice and the ‘I.P. greed lobby’ has a call to answer, and goddammit, there will be retribution.

Aaron’s death must not be in vain.

Link to everything. Post all the articles. Laugh in the face of those who try to lock up information.

Asher’s piece ends with a quote from Aaron himself:

There is no justice in following unjust laws. It’s time to come into the light and, in the grand tradition of civil disobedience, declare our opposition to this private theft of public culture.

We need to take information, wherever it is stored, make our copies and share them with the world. We need to take stuff that’s out of copyright and add it to the archive. We need to buy secret databases and put them on the Web. We need to download scientific journals and upload them to file sharing networks. We need to fight for Guerilla Open Access.

With enough of us, around the world, we’ll not just send a strong message opposing the privatization of knowledge — we’ll make it a thing of the past. Will you join us?