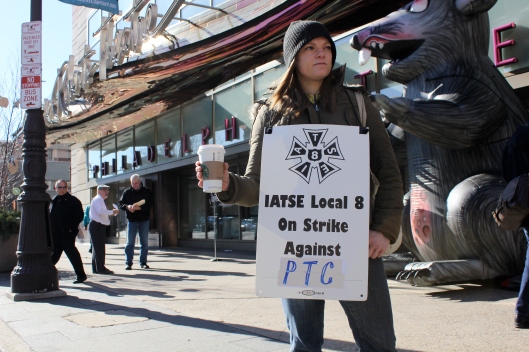 UPDATE: The Inquirer’s Peter Dobrin reports that talks between IATSE Local 8 and the Philadelphia Theater Company management broke down at 2 a.m.

The employer will not agree to back off its demand to have the unrestricted right to hire as many non-union workers as they decide to perform the work covered in the union’s jurisdiction and previously performed by the workers of the PTC who chose to be represented by the union.

However, Sara Garonzik who is producing director at PTC, told Dobrin:

Progress has been made and we are all eager to wrap up as soon as we can.

The Mountaintop is expected to run previews tonight and Sunday, but “without elaborate tech” says Goronzik. Talks between the union and PTC management will reportedly continue tomorrow.

See our coverage of yesterday’s press conference below.

Just three days before Martin Luther King, Jr. Day, stagehands intent on forging an equitable contract with the Philadelphia Theater Company brave a crisp Friday afternoon to hold a press conference on the sidewalk outside the $22 million Suzanne Roberts Theater.

The strike, which began on Tuesday, has canceled tonight’s preview of “The Mountaintop“, which is billed as “a gripping re-imagining of the events taking place the night before the assassination of Civil Rights leader Dr. Martin Luther King, Jr.”

Members of the International Association of Theatrical and Stage Employees Local 8 are demanding “long overdue” health benefits and a pay increase, according to Local 8 media liaison Frank Keel.

The company’s media contact, Deborah Fleischman, was not immediately available for comment. However, the PTC’s Shira Beckerman sent The Philly Post’s Victor Fiorillo this email:

Philadelphia Theatre Company is a small non-profit group that is working to meet the financial challenges it faces in a tough economy, just like many non-profit arts organizations in our region. The Company’s stagehand employees voted in September to become members of IATSE Local 8 which did nothing to change these facts or address the challenges we face. PTC and the Union negotiated an interim labor agreement in October. Since the agreement’s expiration in late November, members of the PTC management team have been in negotiations with representatives of the union on an ongoing basis. PTC is eager to complete negotiations as soon as possible and expects all performances and theatrical events to proceed as scheduled. We remain focused on the goal of working together to ensure the future success of our Company.

Michael Barnes, a business agent for IATSE Local 8, promises that the picket will continue “until justice is won.”

The management of the Philadelphia Theater Company is guilty of hypocrisy in putting on a show about the last days of Dr. Martin Luther King – a man who lived and died for the cause of social justice – at the same time they are threatening the job security of the men and women who make the theater work.

The press conference started shortly after noon. Local members took turns at the mic as a giant inflatable rat – a ubiquitous visual at picket lines – swayed in a bitterly-cold wind.

“I’m sure it’s easier to look at us as line items rather than people,” said Terry Smith, a stage electrician who has been with the Company for 12 years.

Another employee in his mid-twenties spoke about how he and his wife are expecting a child “any day now.”

“I want some healthcare for my baby,” he added.

Shortly before the press conference began, Michael Barnes received word that Company lawyers agreed to meet with IATSE representatives. As of this evening, however, no agreement has been reached.