Earlier this year the Associated Press ran a report which showed that the Department of Homeland Security had purchased 1.6 billion hollow-point bullets. The figure is the largest and latest from recent years of sizeable purchases of hollow-point ammunition by the DHS. The Declaration has learned through internal documents obtained from a confidential source that at least half a million of these bullets came to Philadelphia, for issue to Federal Protective Service security officers employed by a private company. 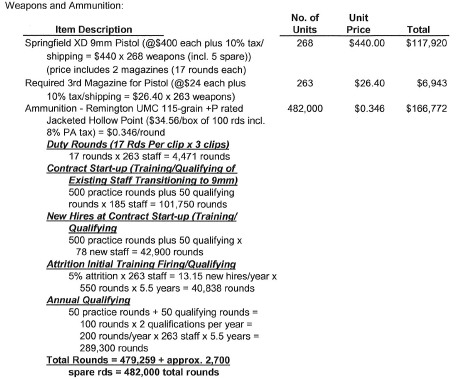 Documents obtained* by the Declaration show 482,000 rounds in the budget for Philadelphia FPS security officers working for a private contractor

The Denver Post reported in February on the stir caused by the large figure. From the 02/15/2013 AP report published in the Post:

The Homeland Security Department wants to buy more than 1.6 billion rounds of ammunition in the next four or five years. It says it needs them — about the equivalent of five cartridges for every person in the United States — for law enforcement agents in training and on duty.

Published federal notices about the ammo buy have agitated conspiracy theorists since the fall. That’s when conservative radio host Alex Jones spoke of an “arms race against the American people” and said the government was “gearing up for total collapse, they’re gearing up for huge wars.

The Department noted that the purchase was in fact routine:

The government’s explanation is less sinister. Federal solicitations to buy the ammo are known as “strategic sourcing contracts,” which help the government get a low price for a big purchase, says Peggy Dixon, spokeswoman for the Federal Law Enforcement Training Center in Glynco, Ga. The training center and others like it run by the Homeland Security Department use as many as 15 million rounds every year, mostly on shooting ranges and in training exercises.

The particular Remington UMC 115 grain +P Jacketed Hollow-Point rounds priced for purchase in the image above are intended for issue to FPS security officers hired through contracting by several companies working through a corporate teaming agreement to staff, equip, and operate the Federal Protective Service Philadelphia “Megacenter.” One of only four such facilities in the United States, the Philadelphia Megacenter is the nexus for monitoring alarm, CCTV, and wireless network communications, as well as providing dispatch, for US government facilities in 13 states, as well as Puerto Rico and the US Virgin Islands.

The Philadelphia Megacenter appeared in reports published last year by Truthout and others regarding an apparent coordination by the Department of Homeland Security of law enforcement operations at Occupy Wall Street encampments in New York City and elsewhere. Other than the redacted documents cited in these reports and assorted Government Services Administration publications, little about these massive intelligence and security operations has been revealed in the press. The Declaration has obtained this latest information as part of much larger disclosures regarding the facility’s operations which will be published in the coming days and weeks.

*In order to protect and maintain a source, the Declaration is presently withholding the names of specific contractors involved, as well as other sensitive and/or identifiable information.