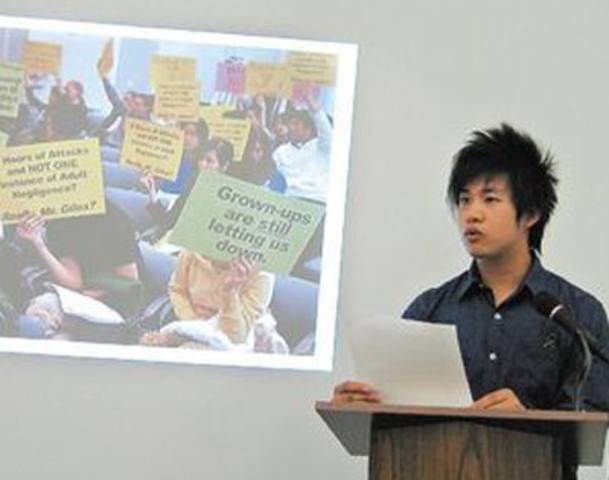 By The Inquirer‘s Jeff Gammage – He’s a leader among young Asian immigrants, an explorer of activist ideals, a part-time teacher of Chinese opera, a son of South Philadelphia by way of Fujian province.

And on Thursday, he was honored at City Hall, praised by Mayor Nutter as “a champion of peace.”

Wei Chen, 22, smiled nervously in the glare of TV lights as friends and colleagues applauded.

In some ways, the last four years have felt to him like four lifetimes, carrying big rewards and huge challenges.

The midmorning event was not an awards ceremony but a chance for Chen to be recognized in his hometown for something special: In October, he was one of 10 young people nationwide to receive a $50,000 prize from Peace First, a Boston group. Nearly 700 applied.

“He has these distinctive organizing skills, but also has room to grow in them,” said Ellen Somekawa, executive director of Asian Americans United in Philadelphia. “I expect to see him at the center of vibrant ideas about how we make change.”

In the weeks before the award was announced, Chen was fast reaching a point where he would have to give up his work, bury the activism in his heart, and get a job to pay the bills.

“Now I don’t have to think about income,” Chen said in an interview. “This fellowship helps me focus on the organizing world, and focus on youth programs.”

People who follow the news know Chen’s name from South Philadelphia High and a time when the school was a symbol of anti-Asian violence.

On Dec. 3, 2009, groups of mostly African American students carried out a daylong series of attacks on their Asian peers, most of them recent immigrants. Thirty Asian students were assaulted, and seven went to hospitals.

Chen, a senior, helped lead a contentious eight-day boycott of classes by 50 Asian students, in the process becoming a spokesman for immigrants. He noted that many black youths befriended Asian students, and said blame for the violence lay with school supervisors who had failed in their duties.

The boycott helped spark a federal Justice Department inquiry that led to a settlement in which School District officials agreed to correct “severe and pervasive” racial harassment against Asians.