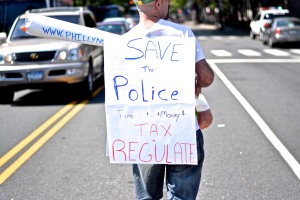 Councilman Jim Kenney and Mayor Michael Nutter have reached an agreement on an amended bill to change the practice of mandatory arrest for possession of small amounts (less than 30 grams) of marijuana in the city of Philadelphia, in favor of a $25 fine and citation.  The mayor had previously been dismissive of the bill, then expressed his openness to working on an alternative measure.

The amended Bill 140377  will differ from the original in that it will also include a provision for a $100 fine, in addition to the $25 citation, for anyone caught smoking marijuana in public. The final version includes all original reporting requirements for the Philadelphia Police Department regarding the number of citations and arrests for marijuana, important for tracking the effects of the bill on racially disparate trends in possession arrests, says Chris Goldstein, a writer and activist with the Philly chapter of the National Organization for the Reform of Marijuana Laws (NORML), who has long lobbied City Hall for such a measure.

“It will give police a new tool instead of guns and handcuffs,” Goldstein told demonstrators Saturday during a rally in Love Park in support of the bill, “it will give them a pen and a pad of paper to write a ticket. Now it’s not full legalization, but it’s a great step forward, and will stop the filling of holding cells every day with a racially disparate amount of marijuana smokers here in this city.” Last year, 75% of those arrested for marijuana possession in Philadelphia were black.

Commenting today on passage of the bill, Goldstein also remarked on special admiration for Councilman Kenney’s audacity and persistence through two incarnations of the bill.

Nikki Allen Poe, a former City Council candidate whose platform included pressure for passage of Kenney’s bill, and who has also been pushing for such a measure in Philadelphia for years, told the Declaration: “This is a major victory for marijuana reform in Philly and shows that a small group of dedicated activists can create real world change working within the political system. Amending the bill to include a $100 fine for public smoking is a fair price to pay to end custodial arrests in our city for weed. I’m so happy that I am tempted to spark a victory joint in Love Park to celebrate.”

Poe, who is on federal probation for his role leading pro-marijuana civil disobedience demonstrations at Independence Mall, noted that he was joking.

It is unclear when the new bill will be signed, but Mayor Nutter and Councilman Kenney have both stated that they expect to see the new policy implemented before the end of Fall.