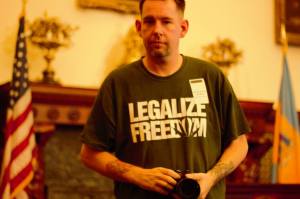 Mike Whiter at the signing of the Philly ordinance decriminalizing possession of small amounts of marijuana.

Wednesday we sat down with Mike Whiter, a retired United States Marine Corps Staff Sergeant and combat veteran, to talk about his plans to receive the first non-criminal citation in Philadelphia under a new city ordinance. Whiter has created a Facebook event page for his ticketing, which he says is a sort of ceremony to both congratulate the city on “finally doing the right thing,” and to draw attention to “underground medical marijuana patients” like himself who can now be spared an arrest for possessing a substance necessary to their quality of life.

Whiter intends to light up at City Hall on the morning of Monday, October 20th. Here’s Mike on his plans (video produced with our madmen-at-arms, Scrapple TV):