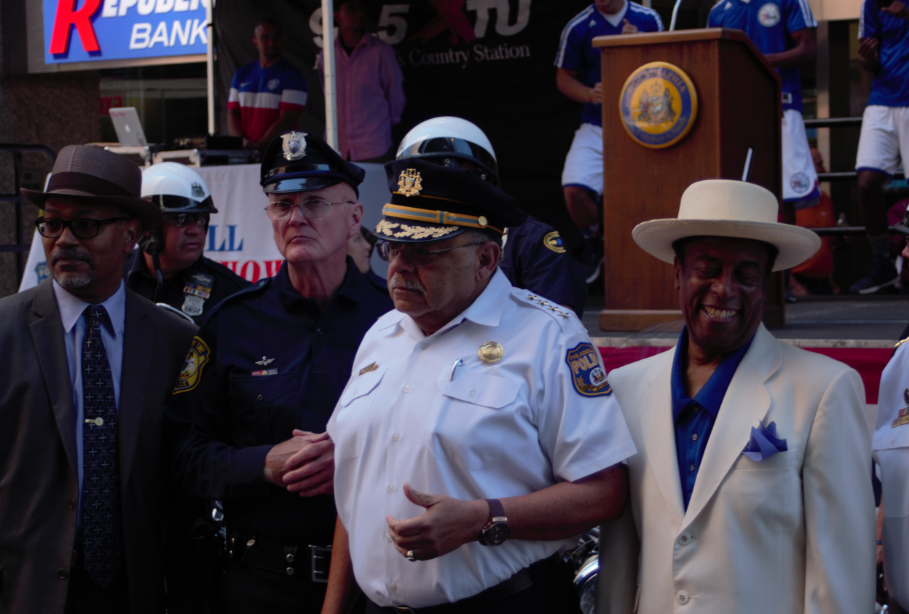 Philadelphia Police Commissioner Charles Ramsey will co-chair a new national task force on militarized police tactics and equipment, charged with developing a draft Executive Order on “21st Century policing,” and delivering its report and recommendations to the President within 90 days. The appointment was announced by the White House yesterday,  part of the Obama administration plan to respond to and prevent crises like that which has roiled in Ferguson, MO and elsewhere, since the killing of Michael Brown by Ferguson Police Officer Darren Wilson last August. The Partnership for Civil Justice Fund (PCJF), a public interest legal organization that has been involved in litigation against Ramsey, condemned President Obama’s choice of Ramsey based on what it says is a “record marked by excessive force, false arrests, and complete disregard for constitutional rights.” The Fund’s criticism stems from the Commissioner’s tenure as chief of D.C. police from 1998 to 2007.

Commissioner Charles H. Ramsey, who also serves as President of the Major Cities Chiefs Police Association and is Executive Director of Police Executive Research Forum, the latter of which has also earned PCJF criticism for its role in what it calls a crackdown on the national Occupy movement, will serve as co-chair with George Mason University professor and former Assistant Attorney General for the DOJ’s Office of Justice Programs Laurie Robinson.  The Task Force will also include other law enforcement as well as community representatives, operating in collaboration with the Community Oriented Policing Services (COPS) Office of the DOJ.

Ramsey has been widely framed as a purger of bad cops, with several high-profile indictments of corrupt officers under Ramsey’s command in both the District of Columbia, and in Philadelphia, where he has been the Commissioner since January 2008 and where he recently invited the Department of Justice to conduct a collaborative review of police officer use of firearms. He was in fact brought in to be DC’s top cop as a reformer in 1998, after years of abuse complaints and reports of systemic corruption in the Metropolitan Police Department, with the former Chicago PD official promising a “new beginning,” for the MPD. According to the Washington Post report from Ramsey’s DC swearing-in: Without offering specifics, he also said he plans to introduce a new community policing system “that responds to the needs of the District.”

Ramsey would pioneer in DC the now ubiquitous approach of “community-oriented policing.” The Post briefly described the then relatively novel idea:

Under the community policing concept, officers work closely with residents and merchants on their beats, fighting crime before it occurs by trying to identify and eliminate circumstances that give rise to it.

The “community-oriented” practices which are championed by Ramsey are often partnered, especially since the 2001 World Trade Center attacks and the creation of the Department of Homeland Security, with a pervasive surveillance function increasingly expected of beat officers under the notion of “intelligence-led policing.”

The Commissioner faced widespread criticism and legal action as a result of the Metro PD’s efforts to preempt mass civil disobedience, by conducting questionable undercover surveillance of the meetings of protesters, and by arresting hundreds of people, many of them bystanders, in expectation of anti-globalization demonstrations during the World Bank’s meeting in the Capitol in September of 2002.

It was reported that the Metro Police predicted no more than 4,000 protesters, twice the final number that attended, and yet Chief Ramsey told city leaders to expect tens of thousands, citing protester rhetoric that they would “shut down the city.” In “Legislative Oversight of Police: Lessons Learned from an Investigation of Police Handling of Demonstrations in Washington, D.C,” Professor Mary M. Cheh of George Washington University writes:

The most egregious police action occurred on Friday morning, September 27, 2002. In what appeared to be a series of preemptive maneuvers netting a total of 600 arrestees, police funneled hundreds of protesters and many uninvolved bystanders into Pershing Park on Pennsylvania Avenue. Once they were corralled, police closed up the park and arrested nearly 400 people who were then escorted to buses which had been standing by for that purpose. There had been no violence, and virtually no disorder – just some chanting, drum banging, and milling about. And, as the police later conceded, there was no order to disperse and, more importantly, no basis for an order to disperse.

The District settled multiple lawsuits resulting from the September 2 incident, and none of those arrested at Pershing Park were prosecuted by city attorneys. The Washington Post reported that Ramsey “defended his department’s practice of sending undercover officers to meetings held by groups planning mass protests, but acknowledged to a D.C. Council panel yesterday that there are no guidelines for such intelligence gathering.”

The model the Commissioner implemented in DC has been carried on by his successor Cathy Lanier, who rose through the department under Ramsey’s command, “past more senior cops in the name of reforming the department,” wrote Washington City Paper’s Rend Smith. According to a report by the Associated Press in January of this year, 110 Metro DC police officers were arrested in the five-year period beginning in 2009.

The Associated Press reports that Obama created the task force to avoid and eliminate  “militarized culture” within US police departments. Carl Messineo, PCJF Legal Director, said “For civil liberties advocates, Chief Ramsey became synonymous with militarized and repressive policing. If this task force is under his command it does not stand a chance of substantially changing the status quo. Keeping Ramsey as the leader of the task force will demonstrate that President Obama is only seeking to provide window dressing rather than to create meaningful reforms.”

The President’s plan for law enforcement reform also includes a 75 million dollar investment over three years in body-worn cameras for police, a pilot program for which has just been announced for police officers in the Philly PD 22nd District. In October the Declaration reported via Christopher Norris that such a pilot had already begun – this was flatly denied by Philly police spokesman Lt. John Stanford.

Chief Thomas Nestel of the SEPTA Transit Police, who introduced a body-cam pilot in his department earlier this year, actively revises and has made available his agency’s policies for footage retention and directives relating to officer operation of the devices.

The Declaration has called on Commissioner Ramsey to make a similar release of PPD policies in the interest of transparency and a broadened climate of good faith.