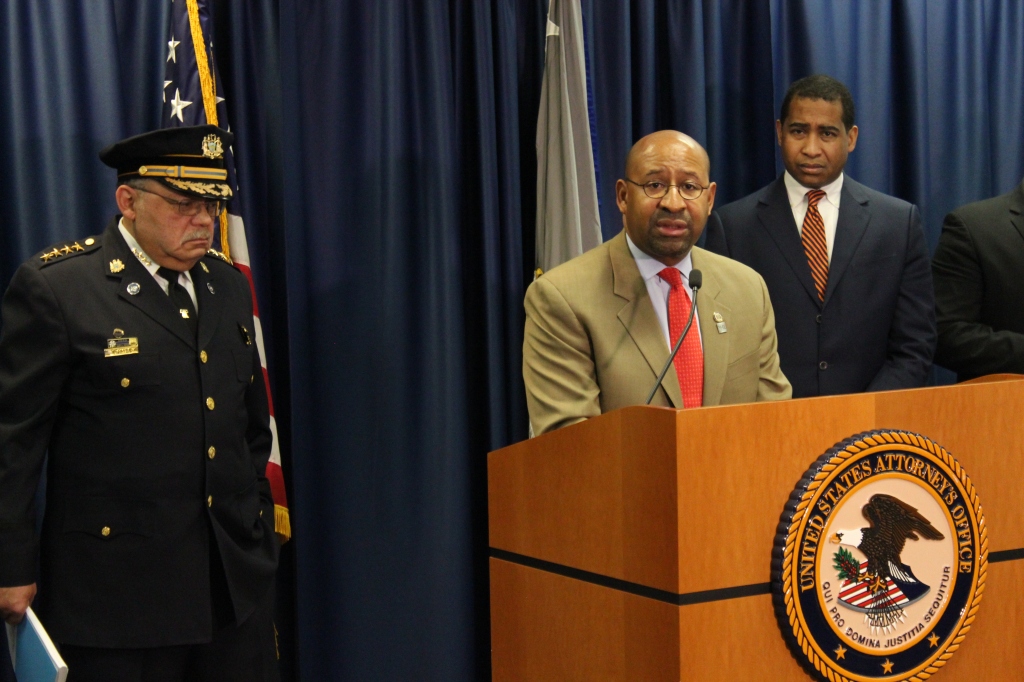 Mayor Nutter at yesterday’s press conference releasing the COPS office report, with Commissioner Charles Ramsey on the left and US Attorney Zane Memenger on the right. Photo by Kenneth Lipp

With yesterday’s release of a highly-critical Justice Department COPS Office report of the Philadelphia Police Department’s use of deadly force, the need for bold leadership and ideas from prospective mayoral candidates regarding criminal justice reform in our city has never been clearer or more urgent.

Stop-and-frisk. A stark lack of police accountability. The school-to-prison pipeline. These are issues that impact average Philadelphians every single day – particularly (and disproportionately) people of color. And the righteous public outrage over how the police department disclosed details into the officer-involved shooting of Brandon Tate-Brown, for example, is a symptom of a much larger problem: anger and distrust from communities on one hand, and a seeming aloofness (at best) or arrogance (at worst) and lack of transparency on the part of law enforcement officials on the other.

As the 2015 election rapidly approaches, it is time that mayoral hopefuls give the public not just “vision” and platitudes about how they intend to tackle these pressing issues, but concrete policy prescriptions, whether pragmatic or controversial. That’s why we’re thrilled to announce a partnership with Christopher Norris, CEO and Editor-In-Chief of news and event company Techbook Online Corporation to co-host “Transparency Now: The Philadelphia Mayoral Forum on Police and Criminal Justice Reform”.

“Bottom line is, the department has a long road ahead, and to succeed, PPD will need buy-in throughout its ranks and with a vast array of external stakeholders,” says Fachner. “That is a major, overarching challenge for PPD’s reform process and one that cuts across many recommendations.”

Please join us on Wednesday, April 29th from 6-7:30 pm for our panel discussion and audience Q&A with Philly’s 2015 mayoral candidates. Click below to RSVP: