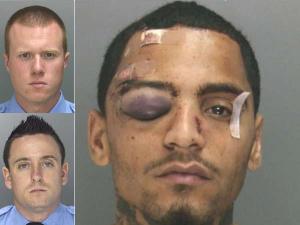 District Attorney’s Office-provided photographs show Officers Robinson (top), McKnight (bottom), and Najee Rivera after his May 2013 encounter with the officers.

After a preliminary hearing on Tuesday, the criminal case against former Philadelphia police officers Kevin Robinson and Sean McKnight was held for trial in the Court of Common Pleas. The District Attorney charged the two in February with a number of offenses stemming from a traffic stop at 6th and Lehigh in May 2013 that left Najee Rivera beaten, bruised and with a fractured eye socket.

During the hearing, Assistant District Attorney Andrew Wellbrock called Rivera and a police detective who investigated the original incident. He also played a video of the stop, which was not found by police but was obtained by Rivera’s girlfriend. Defense attorneys Brian McMonagle and Fortunato Perri cross-examined Rivera about his lack of memory about the incident, and argued that the video and testimony showed that the officers used force to protect themselves and that “we’ve got two innocent guys who are now on trial for crimes they didn’t commit.”

Wellbrock responded that the officers’ version of events doesn’t make sense, and that they need to face consequences for using excessive force against a suspect who didn’t resist. During his closing statement, he told the judge that “opposing counsel is right – we do expect these men to risk their lives – and we also expect them to tell the truth.”

Judge Teresa Carr Deni found that there was enough evidence for the case to go to trial, and the officers will be arraigned on July 14th. They both face eight separate charges, including aggravated assault, conspiracy and tampering with public records, all felonies. Supporters, including around thirty uniformed officers, as well as former narcotics officers Bryan Reynolds and Perry Betts, who were recently acquitted of federal corruption charges, filled the courtroom to support Robinson and McKnight.

McMonagle and Perri declined to comment on whether they were retained by the officers or by the Fraternal Order of Police legal trust fund, which is paid by the city as part of the union’s contract. The FOP previously listed the McMonagle & Perri firm as the union’s counsel on criminal cases.

This piece was cross-posted at The Declaration and The Spirit as part of our new collaboration.