Outside spenders have poured more than $170 million into contests for US House and Senate seats in the last two weeks of the campaign, our analysis of Federal Election Commission data shows. The groups behind this money — super PACs and dark-money nonprofits — do not directly contribute to politicians but instead spend on their behalf, supposedly without coordinating with the candidate, on things like advertising and get-out-the-vote efforts.

The biggest spender, according to reports filed with the FEC between Oct. 24 and end-of-day Thursday, Nov. 3: The Democratic Congressional Campaign Committee, the Democratic party’s official arm for House campaigns, which has pumped some $31 million into these races in the last two weeks. That group’s biggest investment has been northern Virginia’s swing 10th district, where the DCCC has invested more than $4 million to help LuAnn Bennett in her bid to unseat Republican Rep. Barbara Comstock in the Washington, DC bedroom community.

Next on the list top outside spenders is the Senate Leadership Fund. Founded in January 2015 as a sister organization to Karl Rove’s American Crossroads, the Republican super PAC is aligned closely with Senate Majority Leader Mitch McConnell (R-KY) and has dumped more than $28 million into seven states with competitive Senate races: Pennsylvania, Nevada, North Carolina, Missouri, Indiana, Florida and Wisconsin. Of those, FiveThirtyEight’s election-prediction model has three tilting toward Democrats, four toward Republicans.

The third-biggest spender among the outside groups is the National Republican Congressional Committee, which is spending on House races across 15 states, most heavily in Florida’s 7th District, where veteran Republican Rep. John Mica is fighting for his political life against Democrat Stephanie Murphy, the daughter of Vietnamese refugees and a defense analyst; and in Nevada’s 4th, where freshman Republican Rep. Cresent Hardy is facing state Sen. Ruben Kihuen. Both races saw roughly $1.5 million in outside spending from the group in the last two weeks.

The highest-spending group during this time period that isn’t openly affiliated with a party is Majority Forward, which since Oct. 24 has spent $7.7 million in the Missouri and Pennsylvania Senate races. The group, however, is closely aligned with the Democratic party, and, even though a spokesperson for the group claimed earlier this year to be involved exclusively in nonpartisan voter registration efforts, most of its resources in the last weeks of the campaign are going toward television advertising to help Democrats, according to FEC filings.

The second-highest non-party-affiliated spending group is the Koch brothers’ Americans for Prosperity, which supports Republican candidates and causes almost exclusively. More than half of the group’s spending since Oct. 24 — $2.1 million of $3.6 million — has gone toward attack ads targeting Democrat Russ Feingold, who is trying to win back his Senate seat from Ron Johnson, the Republican who ousted him six years ago. AFP’s spending in the raise includes $1.9 million to air a single ad, which you can see at right.

You can learn more about which allegedly “independent” groups are spending where by mousing over our interactive charts, below. 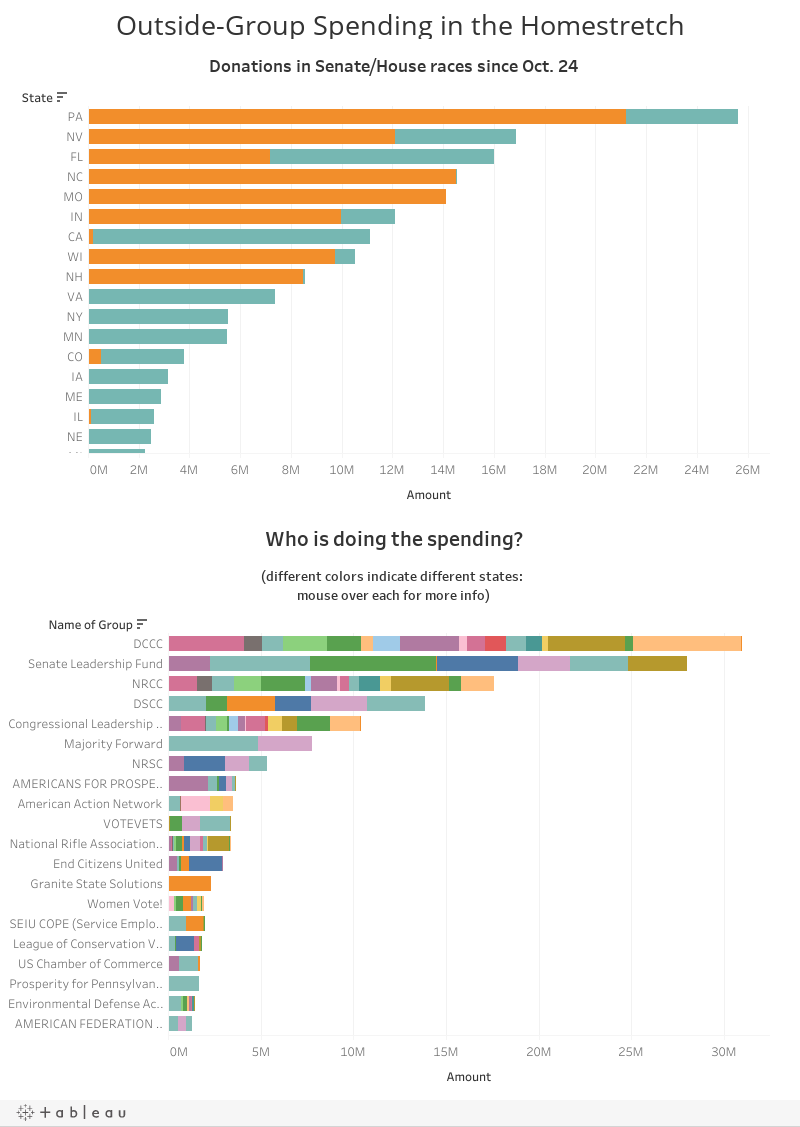