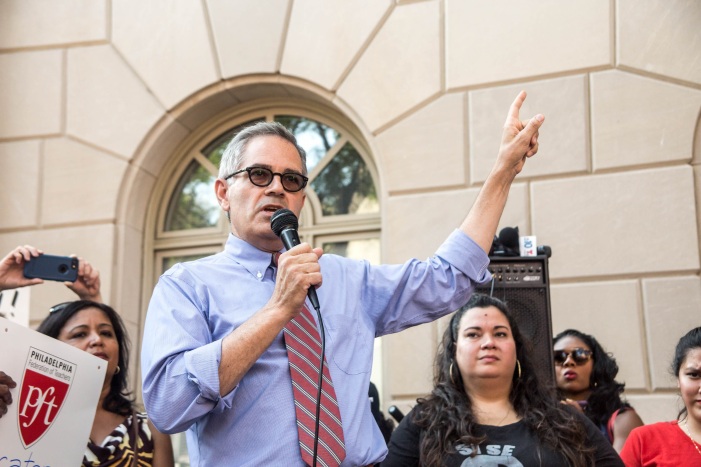 Philadelphia District Attorney Larry Krasner announced on Tuesday afternoon the end of cash bail in Philadelphia for what he described as “low-level” offenses.

“There is absolutely no reason that a person who is no threat to their neighbors or community should sit in jail for days, or weeks, or months, or years because they can’t post a small amount of bail” said Krasner.

Instead, prosecutors will now request that many alleged offenders will now be released on recognizance, on special conditions, such as reporting to Pre-Trial Services, or on “signed on bond,” which requires no payment unless release conditions are violated. It’s possible that a judge could nevertheless set bail or

The policy will apply to what Krasner described as “low-level” criminal charges, including DUI, theft, drug possession and certain drug trafficking crimes. A full list is available in the policy distributed to his staff.

In certain circumstances, Assistant District Attorneys will still be permitted to ask for bail for these offenses.

This policy change not only comes as a victory for DA Krasner, but also for the numerous activists and community leaders that supported him in his election campaign.

Minister Rodney Muhammad, President of the Philadelphia chapter of the NAACP, voiced his full support for Krasner’s initiative.

“The NAACP is on board, and I’m on board” said Muhammad, who is also minister of Nation of Islam Mosque 12 in North Philadelphia and the chair of the Philadelphia Prison Advisory Board.

“We are on board to do everything we can do to reduce the prison population, and keep people from sitting in jail cells unnecessarily,” he said.

Reverend Greg Holston of POWER is also among the community leaders who support DA Krasner’s cash bail policy reform. “Today we see what the act of doing justice looks like” said Reverend Holston.

Eliminating cash bail for many offenses is just the first step in Krasner’s campaign to fully overhaul Philadelphia’s bail system.

However, while the District Attorney has the discretion to not request cash bail, state law does not generally permit judges to hold individuals without bail, even if they might be considered dangerous.

“Eliminating cash bail for certain offenses represents the first step in a longer process about reforming the bail,” according to Ben Waxman, Director of Communications for the District Attorney’s Office.

“There definitely is a lot of interest in moving further than what we announced today,” Waxman told The Declaration.  “We want to see what the impact of this is, measure how it works, and then from there start thinking about what more we can do.”

In order to implement the other half of Krasner’s program, state legislators and the state Supreme Court’s justices would have to agree to amend the laws and regulations governing bail.

As a result of that constitutional provision, Krasner’s plan might even require a change in the state constitution. Otherwise, a defendant held in jail could conceivably demand release with cash bail even though the DA and the courts considered him dangerous.

Waxman told The Declaration that Krasner has been in touch with members of the legislature and court officials to discuss the necessary changes in the law, but declined to offer any specifics about the path forward.