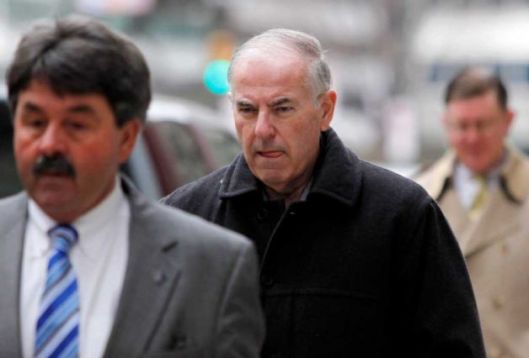 Editor’s note: We are withholding Billy’s real name to protect his anonymity.

Day two for the trial of Father Charles Engelhardt, a Saint Jerome Parish priest accused of child sexual assault, and Bernard Shero, a teacher accused of rape, saw testimony from the alleged victim, “Billy”, as well as compelling accounts from an acquaintance and two close friends of the victim.

Billy, so named in a Grand Jury report in 2010, took the stand this afternoon, and underwent a two hour questioning by the prosecution. Potentially fierce cross examination by defense attorney Michael McGovern will take place tomorrow morning.

Unlike yesterday, McGovern exhibited difficulty in pursuing his strategy of highlighting inconsistencies between witness testimonies during 2010’s Grand Jury report and accounts during this trial.

A slouched, dark-eyed and thin Billy furtively yet almost robotically testified about four instances of sexual abuse he received, starting in the winter of 1999 when he was 10, from three different men. According to Billy’s testimony the incidents of abuse occurred in this order: one encounter with Father Engelhardt, two with now-convicted priest Father Edward Avery, and one with Bernard Shero, his 6th grade homeroom teacher. The incident with Shero occurred in 2000 when Billy was 11 years old.

The victim described the mindset of a 10 year old in a situation like this. “They’re servants of God. They’re almighty. You don’t question them.”

An altar server at the time, he spoke of how Father Engelhardt allegedly caught him drinking wine after morning Mass, and allowed him to drink more before later assaulting him in a side room next to the altar. This room, according to testimony throughout the day, had doors that were lockable from inside.

Your session is about to begin,” he told the boy. “It’s time for you to become a man. God loves you and this is what God wants.

After this incident, he felt “scared and embarrassed…afraid I was going to get in trouble” if he told his parents or classmates.

After the encounter with Engelhardt, the boy began switching altar server shifts to avoid  the priest. This corroborates testimony given by his mother yesterday, as well as accounts from classmates who testified this morning.

The victim then went on to describe two instances of alleged abuse from Father Edward Avery in the Spring of 1999. These encounters took place in a storage room connected to where the first incident with Engelhardt allegedly occurred.

Music and strip teasing were involved in the encounter with Avery, according to the victim.

Although it was not known to parents or students at the time, Avery was not permitted to be alone with children.

Avery has taken a plea agreement and is now serving a 2 and a half to five year prison sentence, despite passing a polygraph test which seemed to vindicate him, in a post-trial motion. Avery’s defense team, at the time of his conviction, argued that he had never met Billy, but took a “sweetheart deal” to avoid facing prosecution for the alleged abuse of other children.

The final instance of abuse allegedly occurred when Billy was 11 years old. Bernard Shero, his homeroom and English teacher, allegedly offered him a ride home from school, but instead drove to a parking lot in Northeast Philadelphia and raped him in the backseat of Shero’s car.

Bernard Shero attempted suicide on the eve of his January 2011 arrest, it came to light at the start of yesterday’s trial.

Both St. Peter and Bowman were altar servers with Billy.

Billy would “often stay later [after mass] than us,” John St. Peter told the jury. He described him as a “jokester,” but tesitified that Billy then became “real dark” after the alleged abuse by Engelhardt began.

He became aware that one of his classmates may have been abused after a phone call with a Philadelphia police detective, but initially didn’t know who the subject of the investigation was, until sitting down with his mother and going over a school yearbook, piecing together that it was likely Billy after looking at altar service pictures and recalling the drastic change in behavior.

Robert Bowman, a closer friend to Billy than St. Peter was, also noted a drastic change in behavior in his friend, whom he described as “energetic and extroverted.” Bowman and Billy would often spend time together after school.

Bowman crucially noted that the room in which Billy’s alleged abuse occurred at the hands of Engelhardt and Avery could be locked from the inside.

The last witness to testify before Billy took the stand was Leo Omar Hernandez. He met Billy in 2004 while both were in 10th grade. By this point in Billy’s life, Hernandez described him as “just different, a rule breaker.”

Billy offered Hernandez marijuana one day and the two became fast friends. This kinship likely explains why, in the Fall of 2004, his friend first hinted at past abuse. The two boys were in Billy’s basement drinking beer and discussing what they both considered a “creepy” teacher at their school, International Christian Academy Charter.

Hernandez noted how upset Billy was during the conversation. With some prodding, Billy eventually told some of his story, which, according to Hernandez, lasted about 40 minutes.

Hernandez was visibly squeamish up on the stand.

Two priests would touch him, and, um, tried to perform oral sex.

Billy’s increasing drug abuse, which escalated to heroin, took its toll on their friendship. Three years after their sophomore year, and with Hernandez leaving to serve in the military, the two eventually drifted apart.

We will continue to update you as the trial resumes tomorrow morning at 9:30 at the Philadelphia Criminal Justice Center.