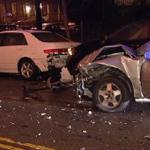 A driver is in the hospital after leading police on a high speed chase through southwest  Philadelphia, reports NBC Philly.

Mayor Michael Nutter has scheduled two public meetings to get feedback from voters on their experience with Philadelphia’s most recent election, about which there are widespread accounts of various improprieties. From myfoxphilly.