A former Graterford Prison inmate, Michael Tabon, has set up a mock cell and has “incarcerated” himself on a hunger strike at the Berean Institute in West Philly. His message to children: “Jail is for suckas’.” Philadelphia Tribune has more.

The Philadelphia District Attorney’s office will indict a grand jury in the trial of a Philly mob hitman, Anthony Nicodermo, reports the Inquirer. Witness intimidation is cited as the reason for using this secretive method. 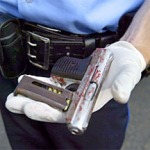 A Philadelphia shooting victim tells Axis Philly that solving the city’s – and country’s – gun crisis will take more than politicians getting involved. 22 year old Kyle Morris calls for a “holistic approach” in this video.

Geekadelphia has the lowdown on all things nerdy this weekend in Philly, including Magic the Gathering action and fun stuff at Barcade in Northern Liberties.