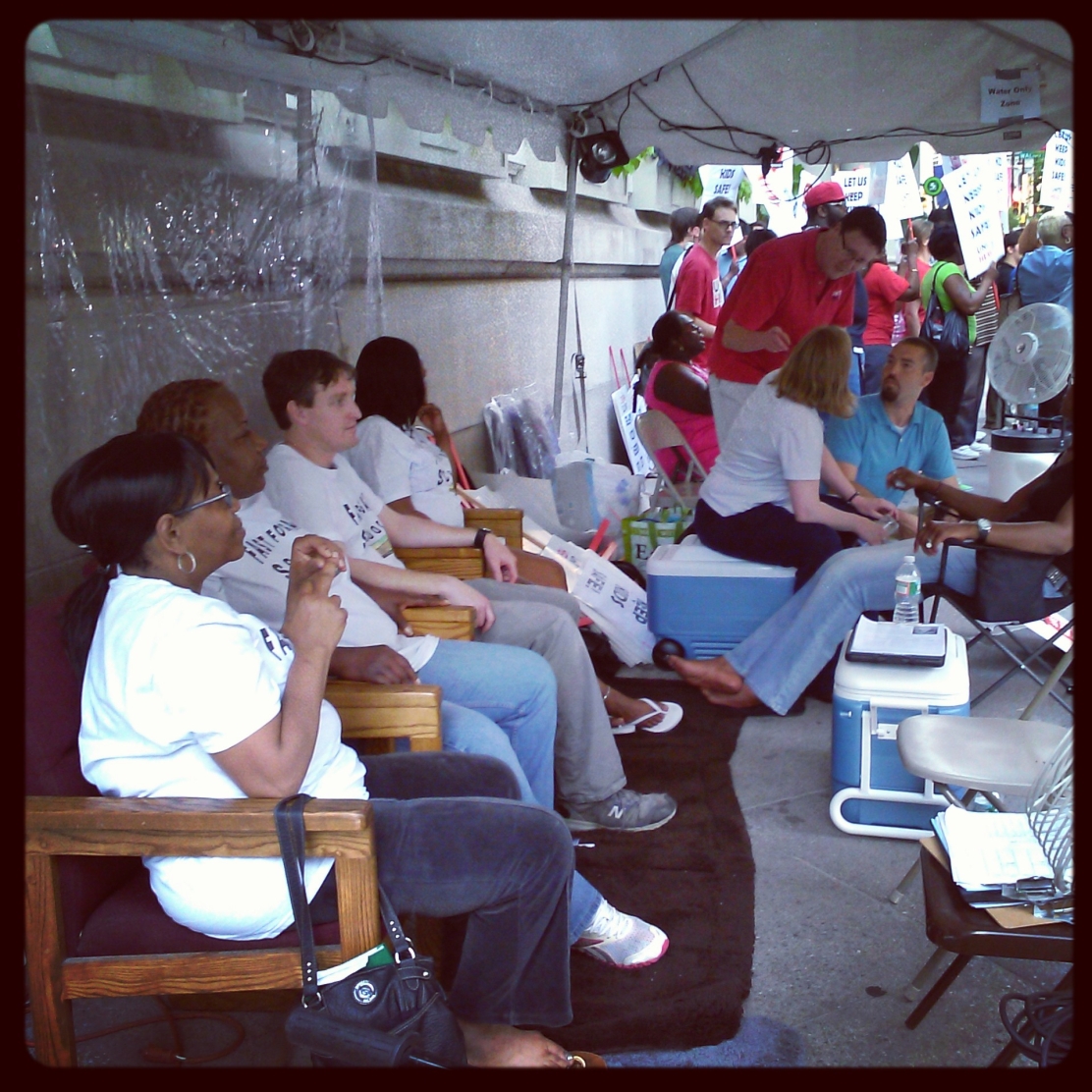 Opposition to one of the largest school privatization efforts in U.S. history is now embodied in a hunger strike at the opulent Bellevue Hotel’s doorstep, where Pennsylvania Governor Tom Corbett’s Philadelphia office is located at Broad and Walnut streets.

A handful of parents and food administrators began a hunger strike yesterday afternoon to protest what has become known as the “Doomsday Budget”, passed on May 30th by the unelected, Corbett-appointed School Reform Commission.

The highly controversial SRC decision may result in over 3,000 layoffs – with safety aids bearing the brunt of the SRC’s decision as part of a 20% cut in school staff, creating a dirth of staff who would normally supervise children during lunch recess and on playgrounds – in addition to the elimination of athletics, art and music programs, plus a lack of paper and other necessities. The decision, if implemented, would also balloon class sizes.

“We felt like in this small window of time that they have to reverse this mistake, we had to do something that could potentially change this conversation, and to put a spotlight on just how barbaric these cuts are,” Mike Mullens, a hunger striker and father of two kindergartners, told me.

Mullens has reason to believe that others will join the strike. He says that they plan to “take this as far as we possibly can” until a state budget is passed that reflects the needs of students and school staff.

“We’ve been watching every powerful person in this state turn their backs on public education. They’re holding this city hostage, parents hostage, and every child hostage,” he added.

Mullens’ belief certainly holds weight, as the May 30th SRC budget, approved by a 4-1 vote, allots $680 million for charter schools and sets aside $280 million for debt service on a $300 million municipal bond that will cost $22 million per year in interest – for the next 20 years, according to The Notebook.

“The School District of Philadelphia has the largest budget in Pennsylvania, behind the city and the state itself. Governing it are people whose qualifications are a mystery, whose intentions are kept private and whose identities are unknown to many. Never has so much money gone unaccounted,” Helen Gym of Parents United for Public Education told Metro on June 3rd.

Marcia Tegle, a food service administrator who also joined the hunger strike yesterday, told me her biggest concern is that children won’t be supervised during lunch. She believes the SRC’s draconian cuts would jeopardize school safety.

Tegle likens this problem to a “snowball effect.”

“They need supervision. If they cut these jobs for safety staff, then who will watch the kids? I guess it would be left to the teachers, so when do the teachers get a chance to teach?”

I asked her if she has children in school.

“No, mine are grown. But every child is everybody’s child. Would you deliberately let your child walk out into traffic? No. It’s not your child though, right?”

City Council begins their summer recess this Friday, and the deadline for the state’s new budget is on June 30th.