A fog of questions continue to surround a City Paper article posted on the morning of July 16th, which was then abruptly and without editorial retraction yanked hours later.

The first post made clear the author’s intention: to expose what they perceive as a cover-up involving City Council President Darrell Clarke’s daughter, Nicole Bright, her boyfriend Jermal Jones, and a drug bust launched by the Philadelphia Police Department’s Southwest division in late April.

According to screencapped documents obtained and posted by the blogger, over 140 grams of cocaine were discovered tucked away inside the couple’s jet-black Camaro. Nicole Bright is listed as a co-defendant on the affidavit of probable cause accompanying the warrant used to search Jermal Jones’ car. The fact that Bright had a personal identification description, or PID (seen in the picture below) indicates she was photographed, fingerprinted, and heading towards arraignment. Unlike Jermal Jones, who is now serving a sentence at Graterford Prison, Bright – for whatever reason – never went to trial.

Now that you’re up to speed on the basic aspects of the case itself, you can check out other seemingly odd details here.

So who is the blogger? Is this individual a member of the Philadelphia Police Department, or someone inside the District Attorney’s office? The answer, of course, remains uncertain. Digging for clues over the weekend, The Declaration found a comment on a Philly message board which initially gave the impression that “mgallagher” may be a police officer.

City Paper‘s Ryan Briggs, in an email response to me yesterday, was emphatic that “the anonymous blogger is not a former or current officer at SW,” however.

Was there interference from powerful people in city government, or did CP uncover credibility issues pertaining to the blogger? Both are possible, although if it were simply a matter of credibility, I speculate that a retraction or follow-up would have happened by now.

Entertaining the first possibility, who among us would be genuinely shocked to learn that there are two sets of rules for society, and that well-placed individuals within the system can use their power and influence to flip unpleasant situations to their advantage? These are well-known secrets.

Whatever happened in late April may not be the most important piece of this story.

When contacted late last week, Briggs would not comment on what prompted City Paper to take down their write-up on Dirty Daughter, but suggested a new post is forthcoming.

CP wasn’t the only one to scrub the story. Philly Daily News’ Will Bunch, in a column yesterday, may have been carefully alluding to five other websites removing the article, although again, he never states this explicitly. 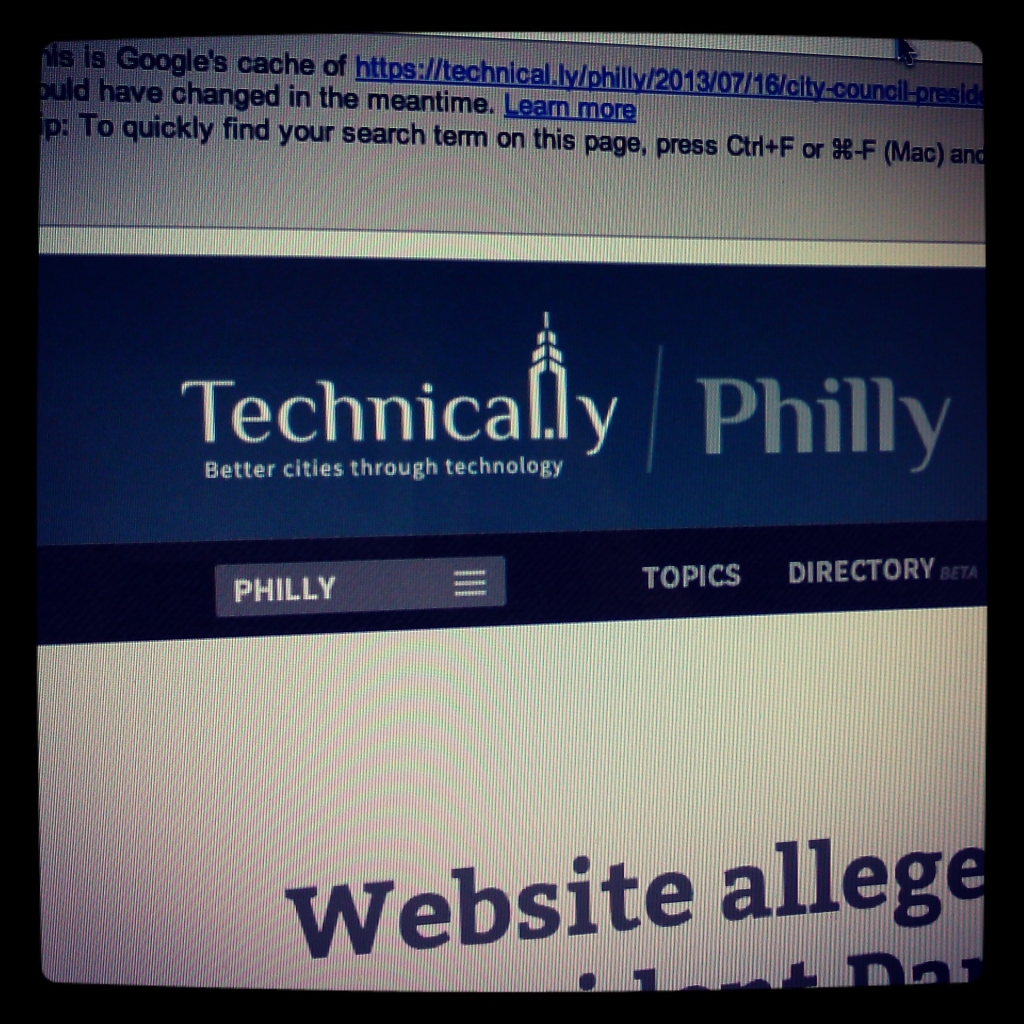 Editor’s note: Technically Philly contacted us to let us know that their article is still live.

It is certainly within the realm of possibility that a powerful individual or organization threatened City Paper with a lawsuit. A 1990 article in American Journalism Review bluntly labeled Philadelphia the “Libel City”. Citing said journal in a shocking April article, Daniel Denvir uncovered an avalanche of plaintiffs dating back to the 1970’s that ranged from “three state Supreme Court justices, a Superior Court judge, nine Court of Common Pleas (trial) judges, a Municipal Court judge, a U.S. attorney, Philadelphia’s district attorney…two City Council members and three mayors…not to mention state legislators, a state lottery official, the dean of a law school, a ranking state police official, a sheriff and a local union leader.”

A successful libel suit against The Inquirer in 1990 – the largest of its kind in U.S. history up to that point – yielded a $34 million judgement for lawyer Richard Sprague on behalf of a then assistant district attorney.

And Sprague continues his litigious rampage to this day. More from Denvir’s fascinating article:

The fact remains that whether the city’s most powerful players are using litigation to intimidate reporters and control news that threatens them, or Philadelphia newspapers just make a ton of mistakes, our city’s media landscape – an industry that with every year seems closer to crumbling, as mogul George Norcross’ terrifying threat to liquidate the bulk of Philadelphia media breathtakingly illustrated in January – will increasingly lack the resources to defend against such attacks.

Simply put, this is not a desired outcome for the free flow of information which empowers a populace to make decisions about who holds sway over our city, and our lives.

The District Attorney’s office, after Councilman Clarke’s daughter Nicole Bright contacted her attorney, Charles M. Gibbs, definitely appears to have made an unusual decision in deciding not to pursue charges against Bright between the time she was charged by police but before the arraignment that never ultimately happened.

“[Bright’s] lawyer spoke to someone in the DA’s office at the Charging Unit…and they declined charges.”

An anonymous source at Southwest Detectives “was adamant that it was highly irregular in such a large narcotics bust.”

It was only when it came to light whose daughter it was that the case became questionable, said the source.

And then there’s this from criminal defense attorney Harold Popper:

‘Ordinarily, would the DA make those types of decisions so early on? Usually not, no. Usually they would charge both of the people … and there would be a preliminary hearing.

As for who prompted City Paper to remove the original piece (that included the “anonymous” blog, and which is no longer referenced at all in the new piece), Briggs would not say. In an email to me this morning, however, he did emphasize:

“There were never any inaccuracies in the first post, nor did we ever receive any serious legal threats. We were not contacted by any lawyers.”

The Declaration will update this story as it develops.