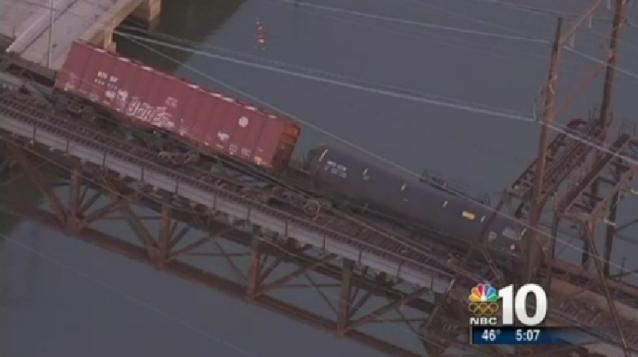 By Isaiah Thompson (Axis Philly) – When a train operated by CSX derailed as it crossed Philadelphia’s Schuylkill River in January, residents had good reason to be concerned.

The train was carrying petroleum crude oil—a substance that is highly flammable and has become, thanks to a boom in oil production in North Dakota and Canada, a major concern for cities across the country after several deadly explosions. The worst, last July in Lac Megantic, Quebec, killed over 40 people and burned down a quarter of the town.

The week before last, a group of environmental activists, lead by an interfaith coalition of religious and community leaders, held a protest calling attention to the hundreds of “oil trains” that come through Philadelphia, sometimes on a daily basis.

Philadelphia has become a major distribution hub for the substance. Crude coming to Philadelphia by rail, mostly from North Dakota and Minnesota, is transported along CSX’s rail lines to facilities in Southwest Philadelphia, where it is unloaded and transferred to ships at Philadelphia’s ports, as well as onto trucks. Philadelphia is in fact home to one of the major rail-to-truck networks in the United States.

It’s a major local industry, but one that goes largely unseen by ordinary residents—at least until recently.