By Will Bunch for the Daily News

IN THE SPIRIT of a 1970s Burger King commercial, low-paid fast-food workers in Philadelphia – and around the nation – say they’re more determined than ever to have it their way. 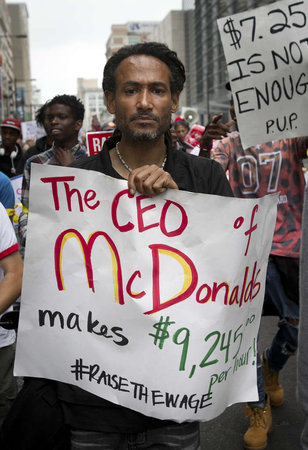 Tomorrow, employees not just from Burger King but also from McDonald’s, KFC, Popeyes and other iconic fast-food chains seeking a $15-an-hour wage and the right to unionize hope to stage their largest one-day job action ever – punctuated by sit-ins and other acts of civil disobedience in a major escalation of their two-year-old campaign.

In Philadelphia, organizers of the #StrikeFastFood event say striking workers will gather at 10:30 a.m. tomorrow outside the McDonald’s at Broad Street and Girard Avenue in North Philadelphia. The plan calls for marching down Broad with home-health-care workers and other supporters to stage what they say will be a “rally and dramatic action” near Broad and Arch streets during the lunch hour.