On Saturday September 27th around 1000 people marched through the streets of Philadelphia to call for the end of rape culture. Police could even be seen leaning on cars, joking around, appearing to not have a worry in the world about the soon to happen demonstration. You probably didn’t hear about it. Because Philadelphia media that day failed to do its job.

On the day of the march, which was announced and widely reported in advance by organizers and local news outlets, the only visible media present was The Declaration – we covered the event last year as well – with three reporters on scene. CBS/KYW  “popped in and out,” according to Christie Eastburn, one of the event organizers.

Philly.com/Daily News has never been present during the protest, and neither has the local Fox affiliate, FOX29. Other outlets like 6abc and Newsworks covered the first march (then called SlutWalk)  back in 2011, but have been absent at every march since , where numbers have increased significantly each year. Metro Philly, which recently acquired the alt weekly City Paper,  has never covered the event in Philadelphia at all, and nor  has The Philadelphia Tribune.

A local journalist who agreed to share her thoughts on the matter said:

“Seems to me that drop-off exemplifies most news’ outlets interest not in comforting the afflicted/afflicting the comfortable but in prefab “controversy” presented by the Slutwalk title–the controversy, or at least provocative idea, being whether women sometimes deserved to be raped or not. In general most news media dismisses issues disproportionately affecting women unless there’s a controversial component involved, as the idea that women in the USA in 2014 are routinely violently attacked with little to no recourse isn’t controversial enough.”

This article is a comprehensive breakdown of this event, showing what each outlet has covered about this protest in the past, what stories they covered on the day of the march, and examples of coverage of similar demonstrations.
Here is a list of every media outlet sent information by the event organizers prior to the march. All were also sent photos and information after the march:

Some outlets listed above, for example The Pocono Record,  would not be expected to cover a demonstration in Center City Philadelphia. This article looks at media outlets for whom the march might be found in their regular beat.

Have they covered it in the past?

I threw in both “slutwalk” and “march to end rape culture” in the 6abc site’s search bar. They covered the event when it first launched back in 2011, and that’s been it.

What stories were they doing that day instead? 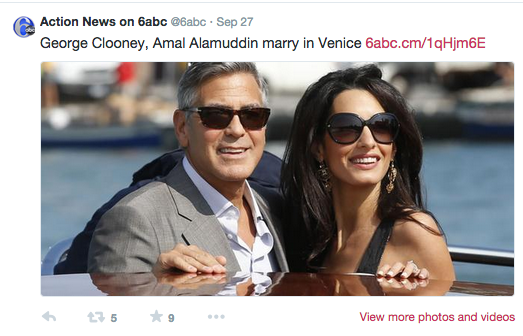 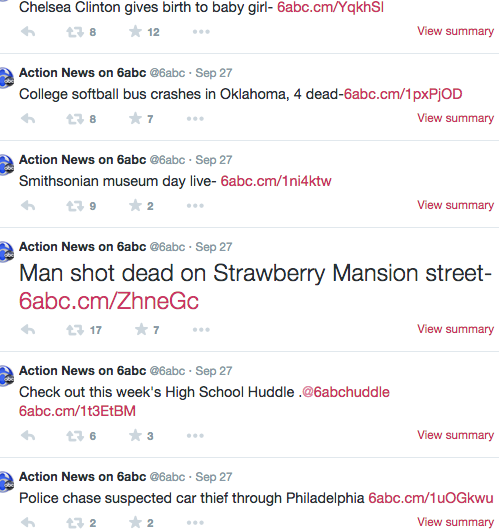 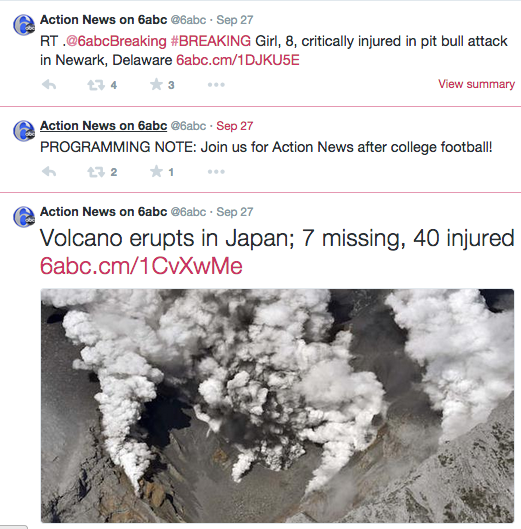 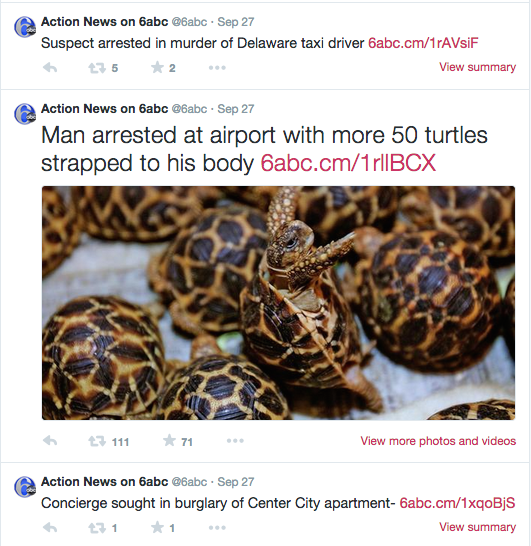 I did the same thing, entered in the search terms “slutwalk” and “march to end rape culture” into the sites search bar with similar results. They covered the event the first year it was held, but again, have not covered it since.

What were they covering that day instead? (including editors picks) 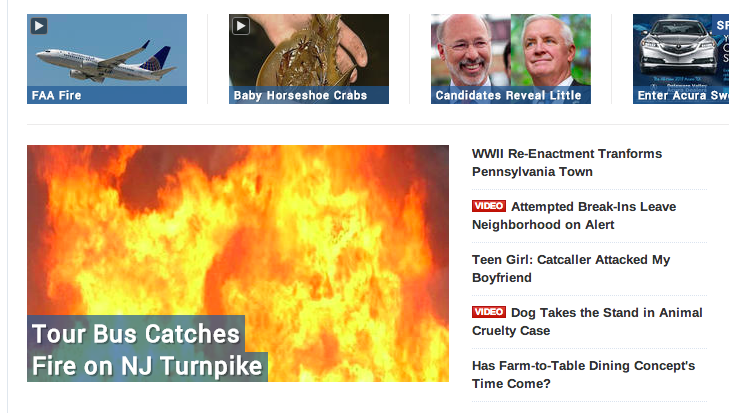 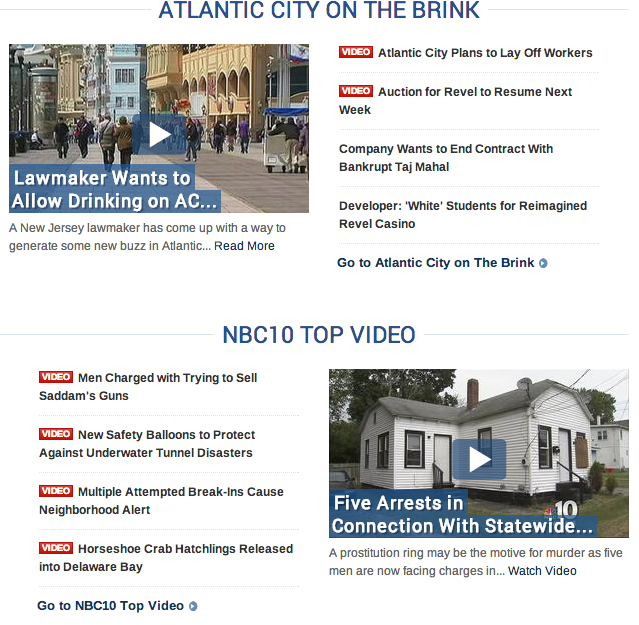 NBC Philly did not reply to my request for comment. 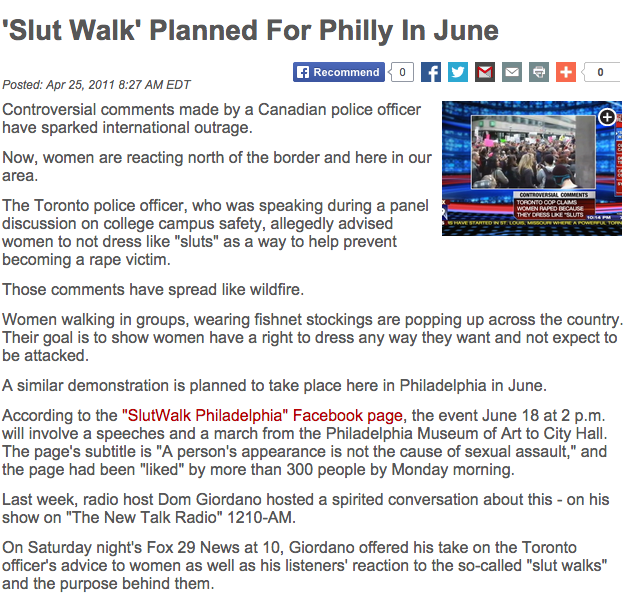 Note that Dom Giordano and CBS decided to call this a “craze.” He also defended the Toronto police chief’s comments which sparked the two women to start the very first Slutwalk protest. And he said “maybe we can tie it in to that Naked Bike Ride thing.”  You can listen to it here,  it starts at about the 14 minute mark.

Fox 29 did not reply to my request for comment. 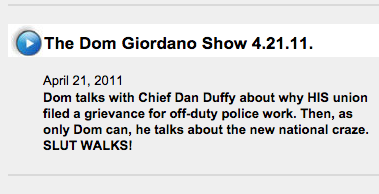 What did Fox29 cover that day instead? 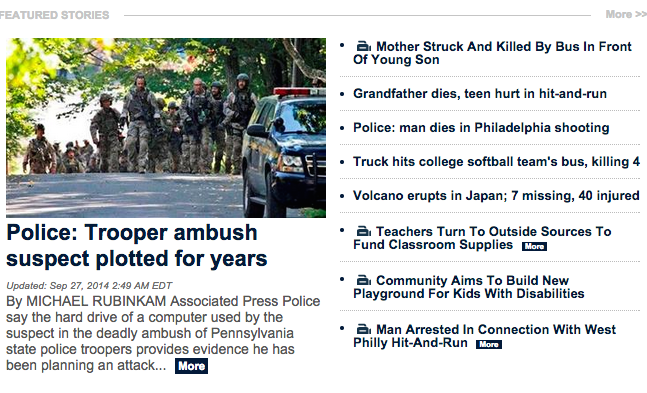 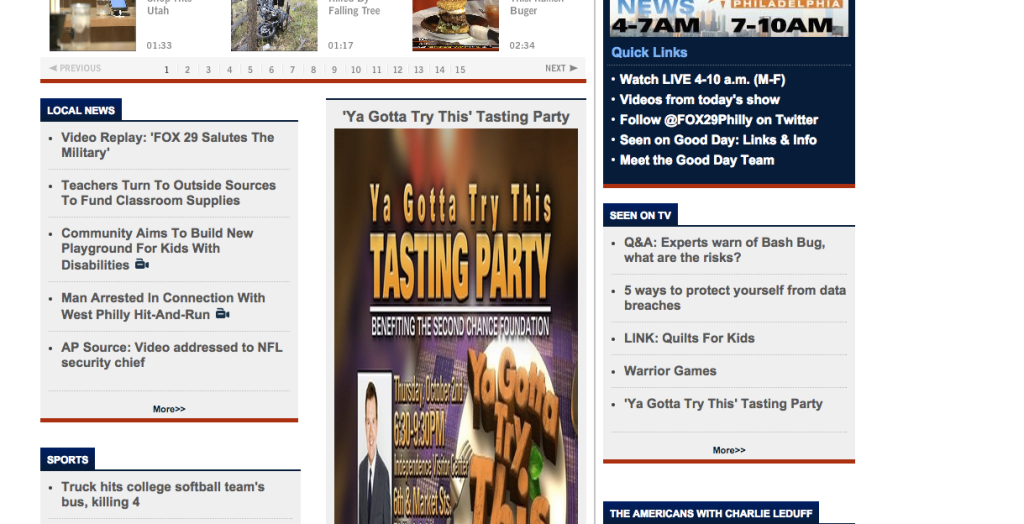 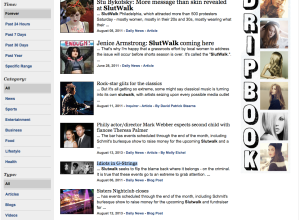 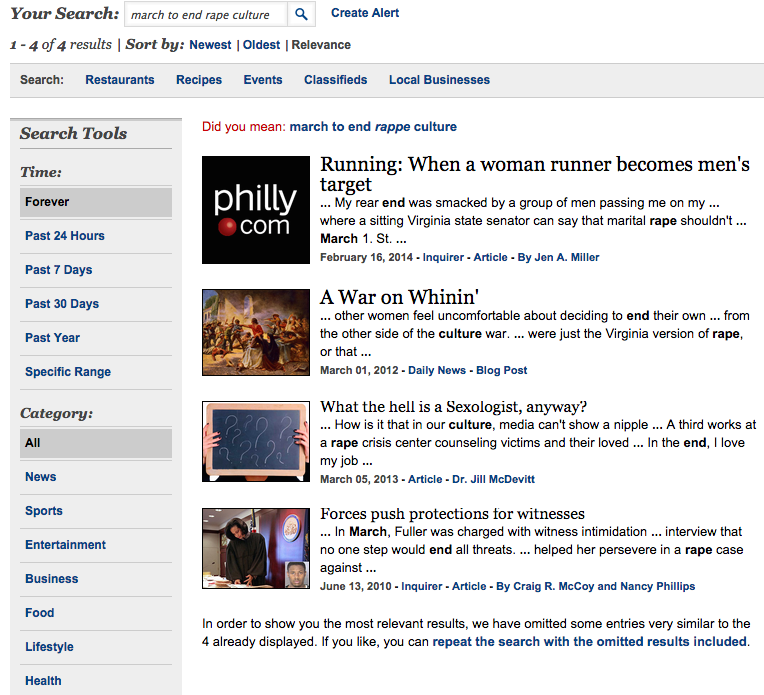 What were they covering instead? 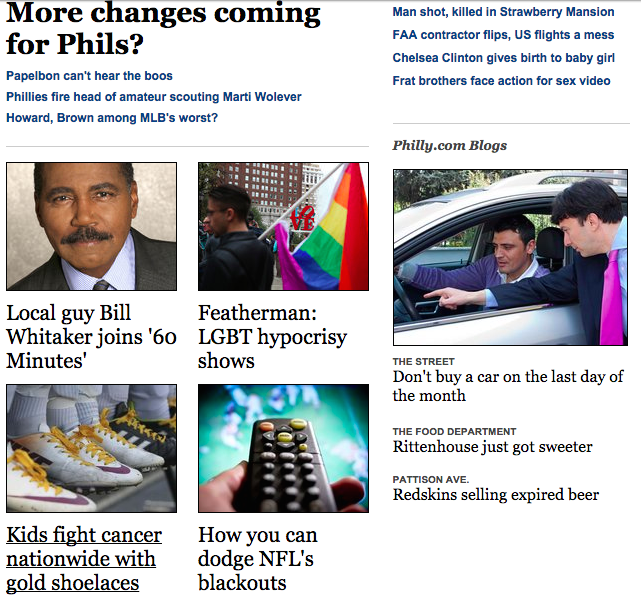 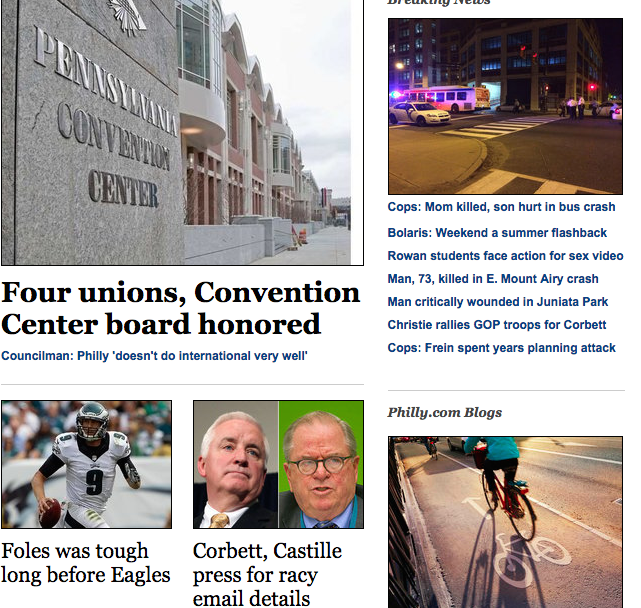 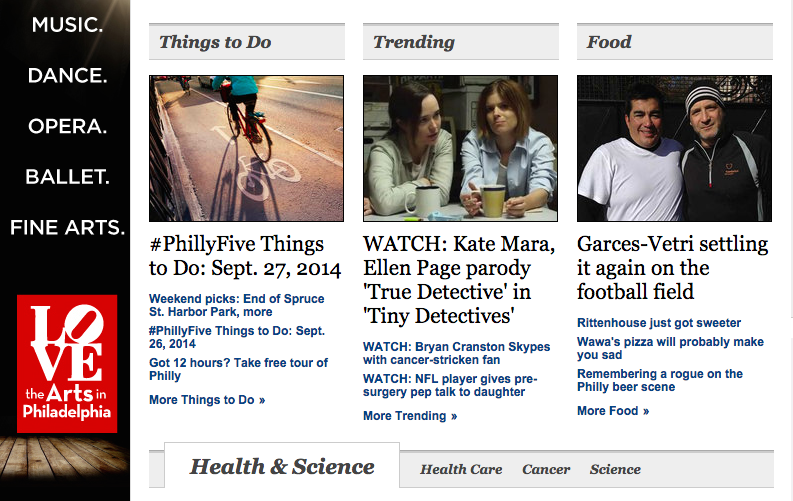 Philly.com and The Daily News did not reply to my request for comment.

Metro Philadelphia has not done any coverage of either slutwalk or the march to end rape culture. They also did not return request for comment. The stories they covered that day were equally as unpalatable as some of the other stories above.

They were the biggest media outlet in Philadelphia to cover the event. They were not there for the event’s entirety, and the coverage they did was  arguably bad. Maybe they could have gotten quotes from people other than the event’s organizers? 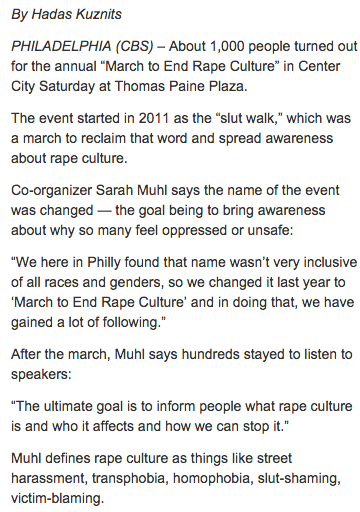 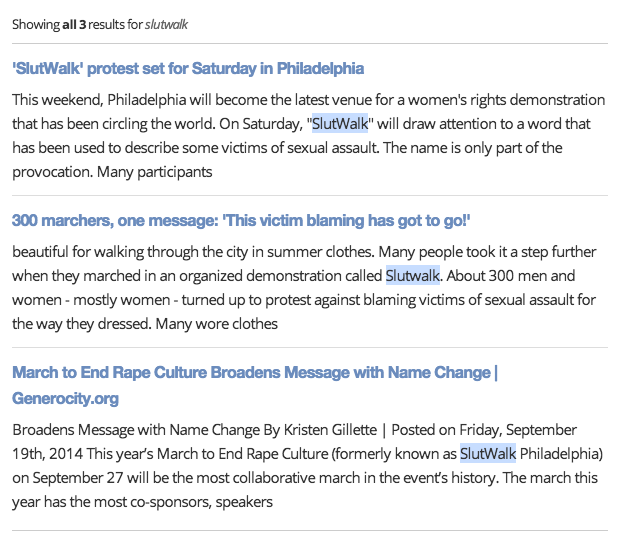 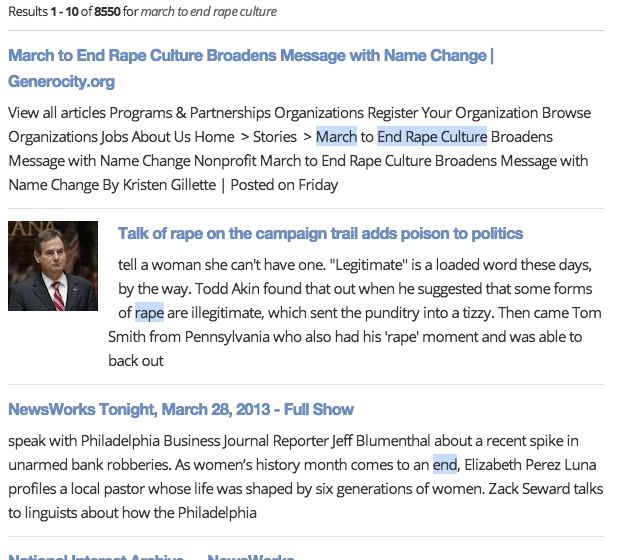 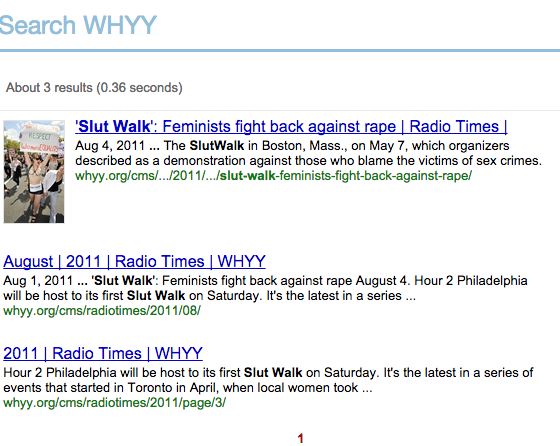 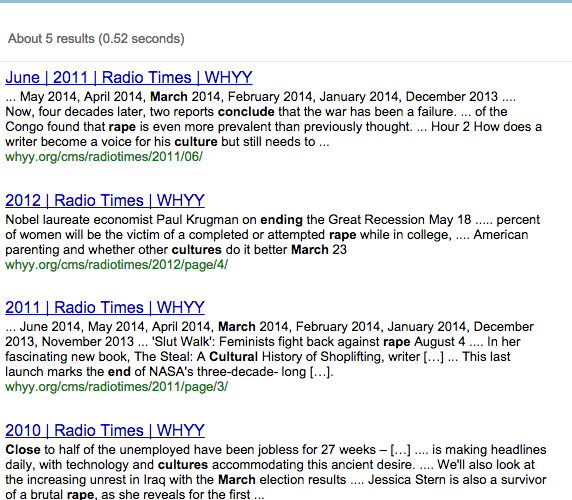 Newsworks did not reply to my request for comment.

What they were covering that day instead.

I will note though I don’t think the stories they chose to do that day are bad, I generally enjoy this news outlet. 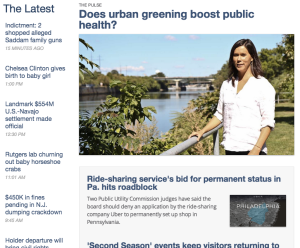 The Philadelphia Tribune has never covered the march, nor did they reply to my request for comment.

Citypaper has done an abysmal job covering the protest as well, and did not reply to my request for comment. 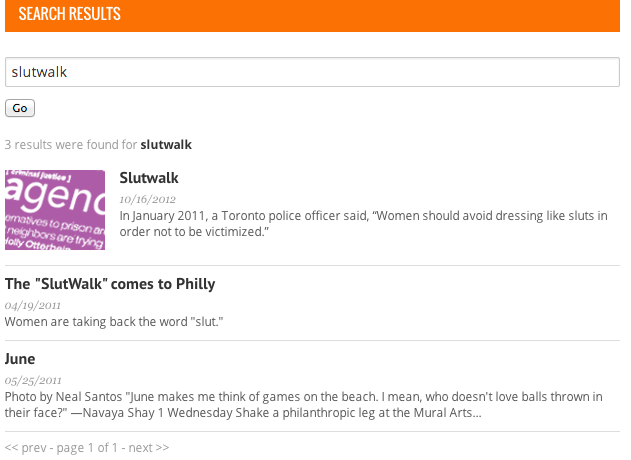 Philebrity has covered this event essentially every year since it’s beginning. They aggregated the CBS story which is the most to expect from them. They don’t typically send individuals to events for field reporting.

Philly Mag did an article leading up to the event. They also were one of the few outlets to get back to my request for comment. Brian Howard, the news editor had had the following to say:

“We wrote about the march in advance, and re-promoted it again on social media the day of the event.What we cover and how is always a balance between reader/editorial interest and reporting resources.”

Philadelphia Weekly also did an article leading up to the event. PW also responded to my request for comment, essentially saying the same thing as Philly Mag.

“Once again, as I said: We don’t report day-after-the-fact stories about the vast majority of events happening in the city. Sometimes our writers report back from an event the next day. Usually, they opt for the longer and more thoughtful view. If you would like to express your opinion that PW should have written about the March to End Rape Culture differently from the way in which we in fact did, then I will look forward to reading that opinion.”

Since they already had someone there, why not follow up with a small post with photos? It’s one thing to not send someone there because of lack of resources, it’s another to have someone there and not ask them to do a follow up.

Coverage in Philadelphia media of similar, but less well-attended, demonstrations:

It is completely unfathomable to me that this protest was not covered. Maybe advertisers don’t like seeing women taking back a word and way of thinking that has been used to demean and condemn them for centuries? Maybe it’s because news media is a male dominated world?  Anytime 1000 people decide to protest and march, for whatever reason,  it would seem to be news.