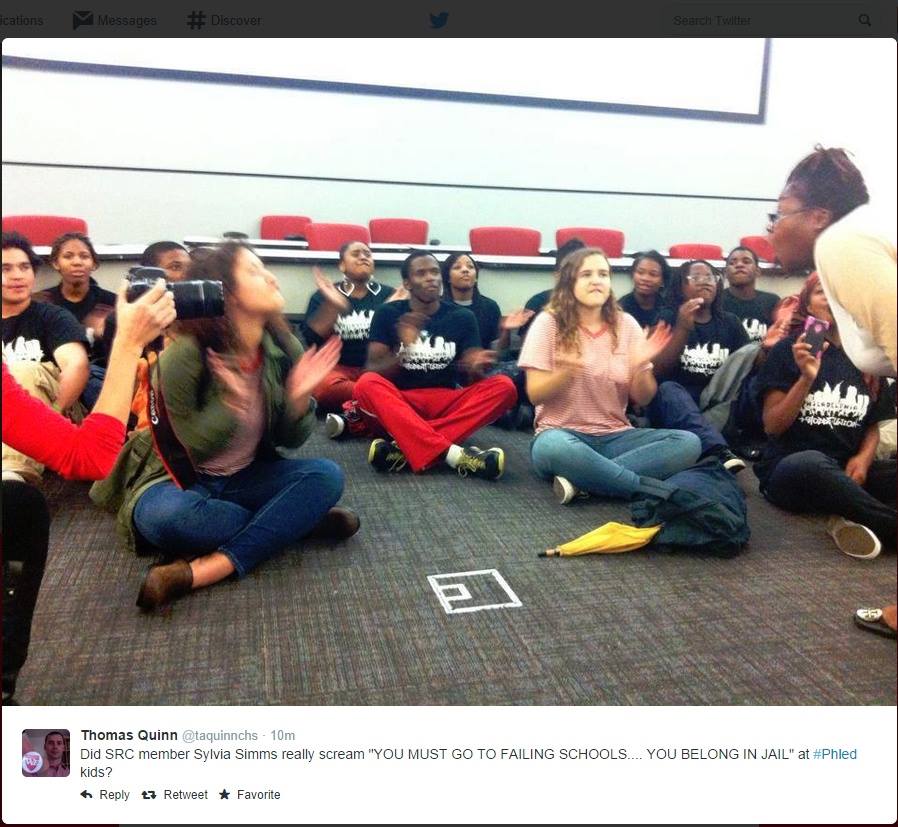 Last night at a screening of the film “Won’t Back Down” at the School District headquarters in Philadelphia, members of the Philadelphia Student Union sat-in to demonstrate against what they say is propaganda for the School Reform Commission’s (SRC) subversion of the teacher’s union. Raging Chicken Press reported, per tweets from students attending the protest, that a member of the SRC, Sylvia P. Simms, taunted the youth, saying “You must go to failing schools” and “You belong in jail.”

Raging Chicken Press also reported a response from a parent of one of the berated students, who was aghast and disgusted with Commissioner Simms’ behavior.

I am appalled and ashamed at the behavior of Sylvia Simms, and some of the other adults, at this gathering. They shamefully menaced the same school children they are sworn to protect and serve, insulted and shamed them because they dared to challenge the authority of the SRC. They specifically denigrated and belittled my kid, who is incredibly successful, by anyone’s measure.

Ms. Simms was appointed to the Commission by Mayor Nutter in early 2013 and hailed widely at the time as a “fresh perspective.”

Simms’ profile on the SRC website says she now “works for the Comcast Corporation and the Urban Affairs Coalition as Outreach Project Coordinator for Broadband Adoption.” She is also a former district school bus attendant.

The screening was sponsored by Comcast Internet Essentials, GPS, and E.A.R.T.H.S.

“I think the scene at the SRC movie screening on Wednesday night was sadly indicative of just how far over the cliff these folks have fallen,” he told The Declaration this afternoon. “It’s not enough to spend public dollars on anti-union propaganda and fake protesters. [They have to] insult a group of young people expressing their views, the very people you’re supposed to be working for!

A few mutual acquaintances have suggested this outburst is not characteristic of Ms. Simms, and I see tweets from her asking to meet with the Student Union. Whether this is sincere or damage control, she owes our kids a public apology.”

Simms also chimed in, telling The Inquirer in a telephone interview that the students mischaracterized her remarks.