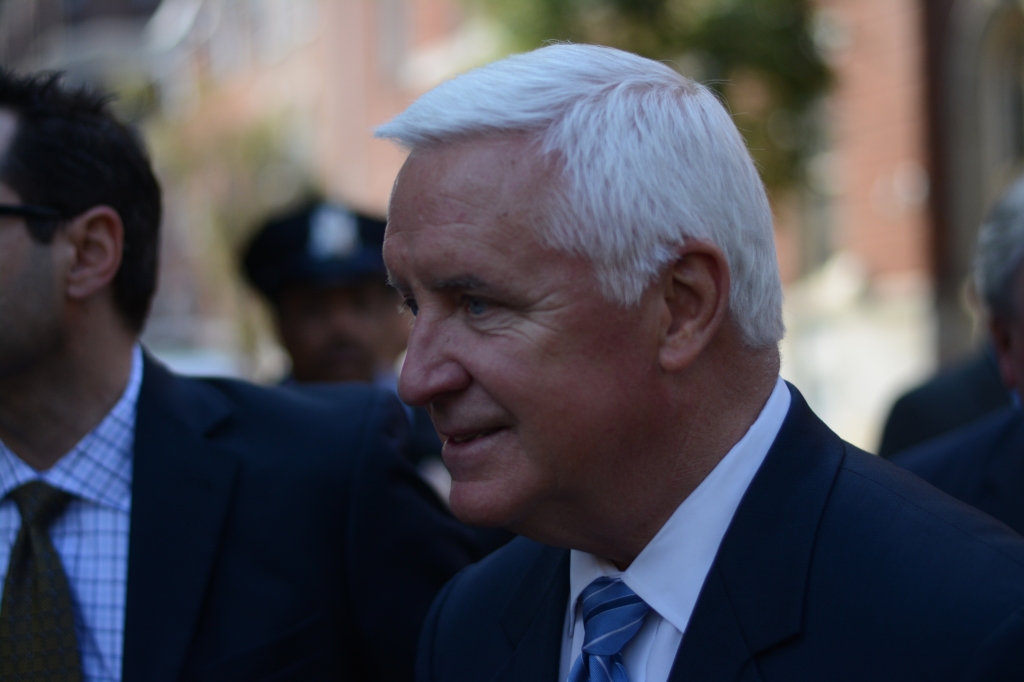 Governor Corbett at the signing Tuesday. Photo by Joshua Albert

Several blocks around the intersection of Thirteenth and Locust were shut down during the late morning and early afternoon this Tuesday for a public signing of a bill “providing for revictimization relief” by Pennsylvania Governor Tom Corbett, together with a Fraternal Order of Police rally, and a counter-protest.

The bill in question was Senate Bill 508, which allows crime victims (and, on their behalf, government attorneys) to seek injunctions against “conduct” by the person convicted of harming them that perpetuates the crime, and which critics say might lead to restrictions on speech merely because some find it uncomfortable.

The bill was, and the law now is, controversial because of the scope of the conduct that could potentially be enjoined and because of the circumstances surrounding its passage. The law specifically states that any conduct which causes “temporary or permanent state of emotional anguish” could be the subject of an injunction, which critics such as the ACLU of Pennsylvania suggest is overly broad and could be used to at least attempt to enjoin convicts from speaking if it bothers someone they harmed.

Critics also point out that the law appears to have a specific target: the public speeches of Mumia Abu-Jamal, a former death row cause célèbre now sentenced to life without parole in Pennsylvania’s prisons for the 1981 murder of Philadelphia Police officer Daniel Faulkner. The original bill, House Bill 2533, was “introduced… after Mumia Abu-Jamal… earlier this month delivered from behind prison bars a controversial commencement speech,” according to a press release from its original sponsor, 150th District Republican Mike Vereb. Vereb’s language was later incorporated into Senate Bill 508, which originally contained an entirely different amendment of the Crime Victim’s Act, as it was being considered in a House committee. SB 508 as amended passed both houses and was the bill signed into law today by Governor Corbett.

Protesters hold up a banner with Mumia Abu-Jamal’s response to the Act’s signing. Photo by Joshua Albert

Speakers at the signing were equally direct about their intent: Maureen Faulkner, the wife of the murdered officer, spoke of “silencing” Abu-Jamal and later, in response to another reporter’s question, made a quip about “shutting down” Abu-Jamal’s “cottage industry” of radio broadcasts.

Supporters of the law, however, maintain that the law is constitutional, because it doesn’t directly ban speech. Representative Vereb stated that it merely allows a victim to request an injunction against conduct that could include speech, and that a judge will decide any constitutional questions. While maintaining that he believes Abu-Jamal’s speech to be injunction-worthy, he said that giving the issue to a judge to decide avoids any thorny legal questions.

An original sponsor of the bill, Senator Lisa Baker, subsequently removed her name from the legislation. Reached for comment, Senator Baker’s office stated that her withdrawal as sponsor was not based on First Amendment grounds, and that she had voted for the final legislation.

While this may dodge some constitutional questions, it does so by placing them in the lap of the courts. The U.S. Supreme Court has repeatedly ruled, starting with Near v. Minnesota, 283 U.S. 697 (1931), that prior restraints against speech must meet a high burden to be acceptable, and that that court injunctions, which threaten the enjoined party with sanctions should the injunction be broken, are often a form of prior restraint. While it could be argued that the injunction was necessary to prevent harm to a private right, the Supreme Court has also been hostile to limiting its protection of speech based on the emotional state it causes in others. In Snyder v. Phelps, 131 US 1207 (2011), the court affirmed its ruling that the First Amendment is a protection against private injury claims, in this case from a father who was emotionally anguished after the Westboro Baptist Church picketed the funeral of his son, a soldier killed in Iraq.

Perhaps the most revealing part of this story will come later, when the public sees whether or not Maureen Faulkner, Philadelphia D.A. Seth Williams or another longtime opponent of Abu-Jamal’s will attempt to get an injunction against his speech, or whether they will let it stand as a symbolic condemnation of his alleged impact on Ms. Faulkner’s psyche.