Poe and the Scrapple gang, along with a special co-host, chef Loka Mota, do it again with a tour of that most debauched and American Hajj, the Black Friday trip to retail monument Walmart. They’re on scene at midnight to see why people are greedily pursuing more Stuff at what Poe calls the “temple of capitalism.”

They talk to an older gentleman, who was surprised to find the crowd manageable “after last year,” adding that he knows “you can’t make a living here.”

A Wal-Mart representative comes out to tell Loka and Poe that they have to leave, refusing to tell them why or to answer questions, but telling Poe he should call a telephone number he has given him. Poe is not interested in calling any number, insisting: “I am a member of the media and I am here talking to Black Friday shoppers no different than fucking Cecily Tynan.” [the longtime WPVI reporter] Loka and Poe stand their ground, and the Walmart rep departs (but makes another appearance soon). 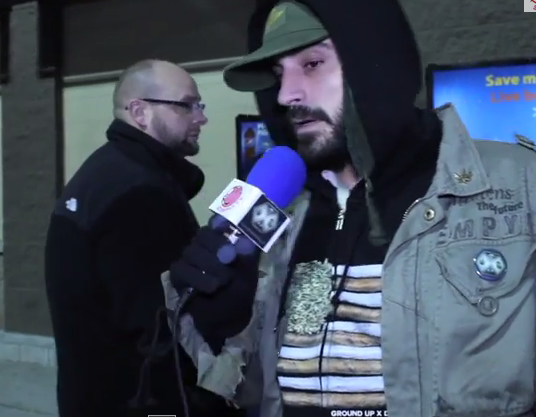 A Walmart rep tells Poe “I just need you to leave.”

The Walmart rep returns with a meek associate of some kind in-tow, this time claiming that the reporters are blocking a fire lane (and his “ingress and egress,” he says with officious determination) and again insisting that they leave the premises. Poe and Loka repel them again, but soon the police are there.

It turns out that the Walmart folks called the police and told them that the Scrapple crew were “protesters,” which the officer who speaks with the reporters accepts, radioing-in that “They’re not protesters, they’re media. A small outlet.” The cop goes back to her car laughing. 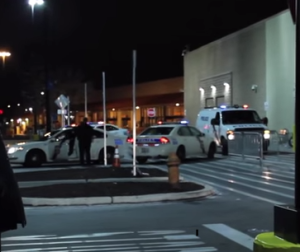 Walmart was clearly expecting trouble (the PPD sent several cars), and protests at stores all over the country have rivaled sales figures in news coverage of recent Black Fridays.

We’ve really gotta hand it to Poe and Loka, and cameraman and editor Liam McGlynn. This is good shit in a pretty crowded indy-media Black Friday bowl.

take on the corporate monolith Walmart on black friday.