All Photography by Kristi Petrillo/Staff Photographer 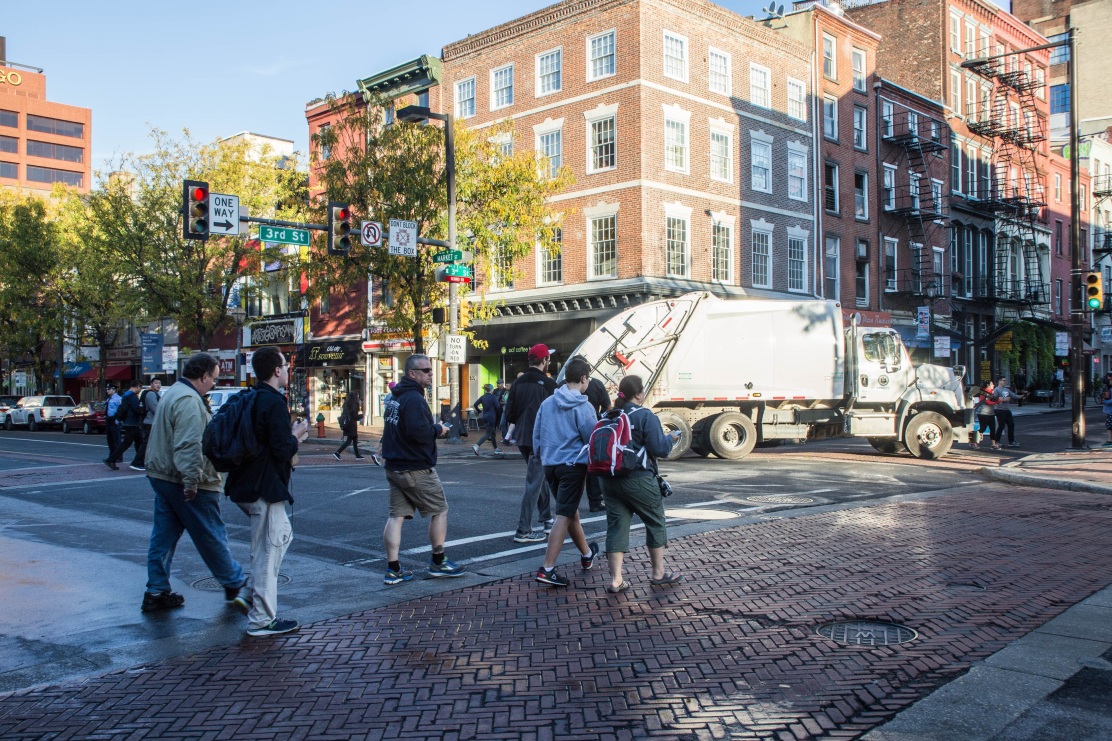 Dena Driscoll, a mom and founder of Kidical Mass, spoke to me as she pedaled the car-free streets in a bakfiets with her two children, Milo and Juniper, in-tow. Driscoll, who is the co-chair of the 5th Square organization board, helped organize 2016 Free Streets.

Driscoll said OTIS, the agency in charge this year, pushed her and other community organizers to the side.

“Would you want to work with a lot of loud, opinionated people?” mused Driscoll. “We offered to help and give our advice as the people who had organized the last Free Streets, but OTIS said no.” 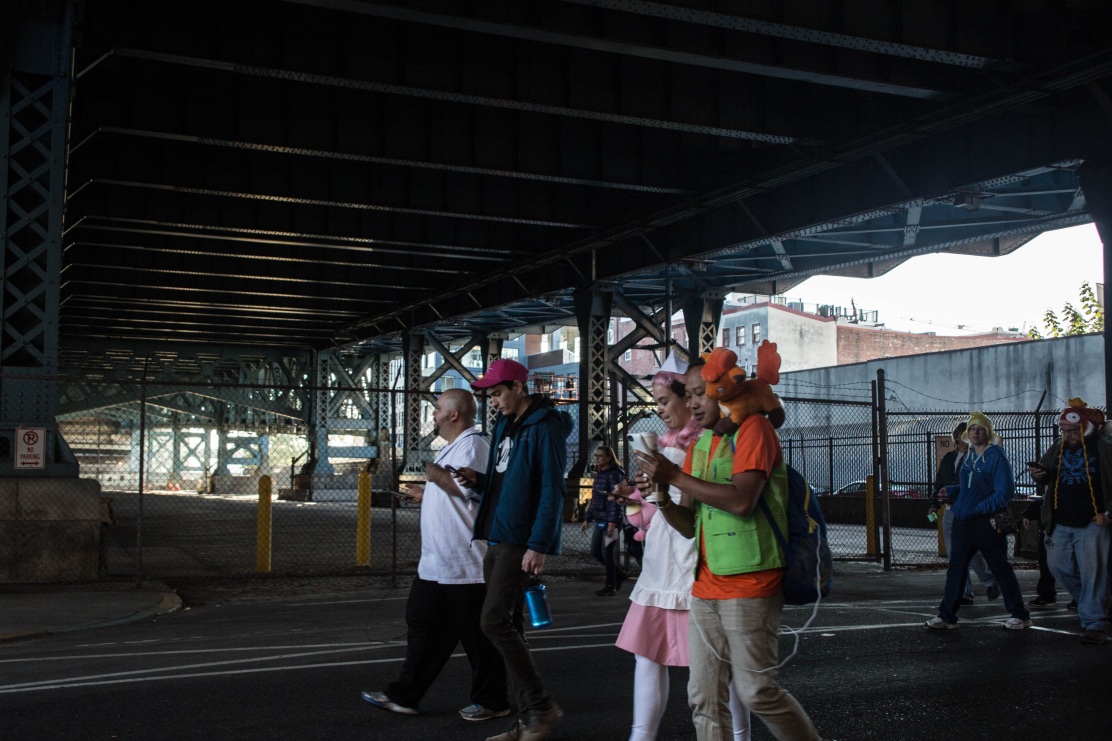 Driscoll was pleased with much of what had come of the OTIS version of Free Streets, but had critiques as well.

“The city puts up these trash trucks at every intersection to block traffic. We tried to tell them last year that this is a bad idea, that it creates a bottleneck and visually blocks drivers from seeing the people on bikes and pedestrians coming through. They did not listen to us.” 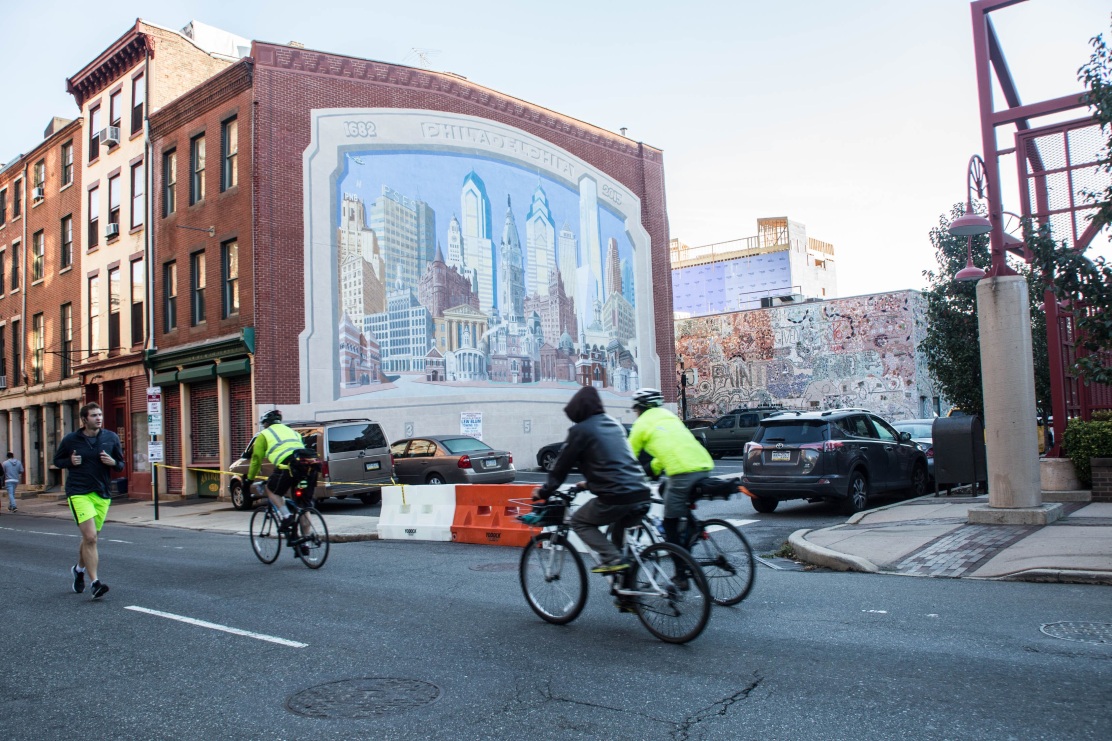 Instead, Driscoll said that Jersey barriers, with better visibility, would have made sense.

“There needs to be enough room to get all the cyclists through, and there just isn’t.” 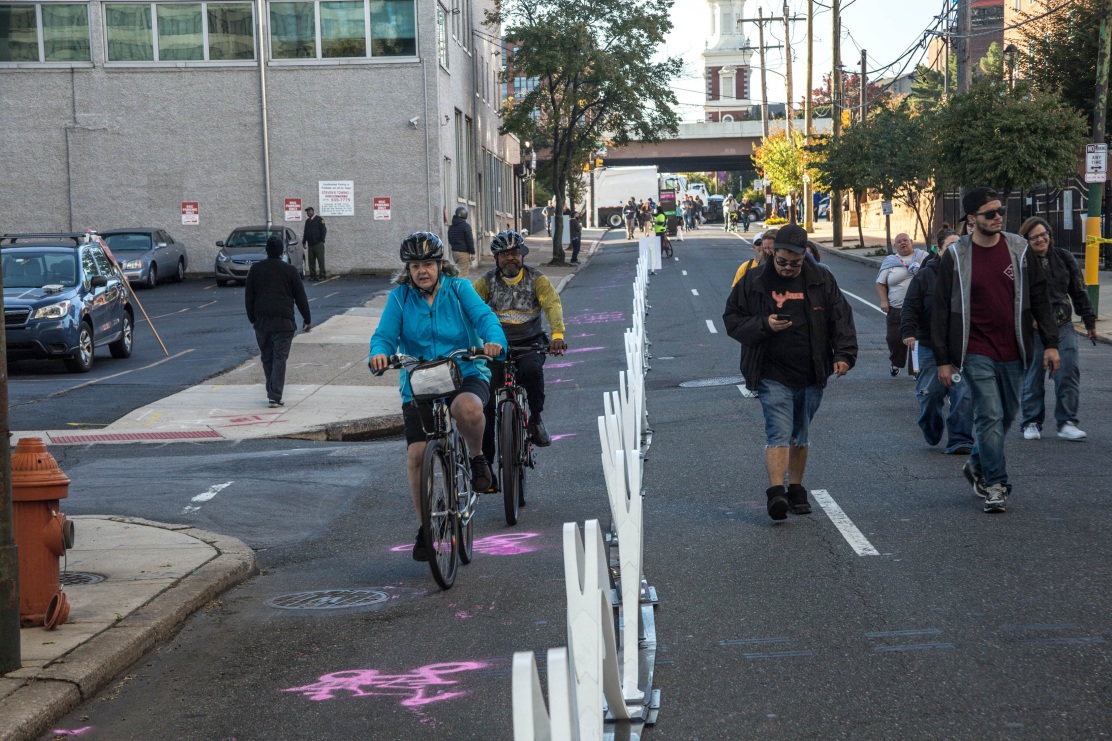 At each of the trash trucks, an employee sat idle in the truck. Driscoll felt this was an unnecessary expense.

“The reason the city prefers trucks to Jersey barriers is that they can roll in the morning of. It’s not a consideration of what’s best for the event.”

“We see bicycle and pedestrian induced demand. We’ve opened up this street and made it a pleasant place to be,” Driscoll observed as she pedaled around a corner. “This is almost like the Schuylkill River Trail. We have too many pedestrians and cyclists for the amount of space here.” 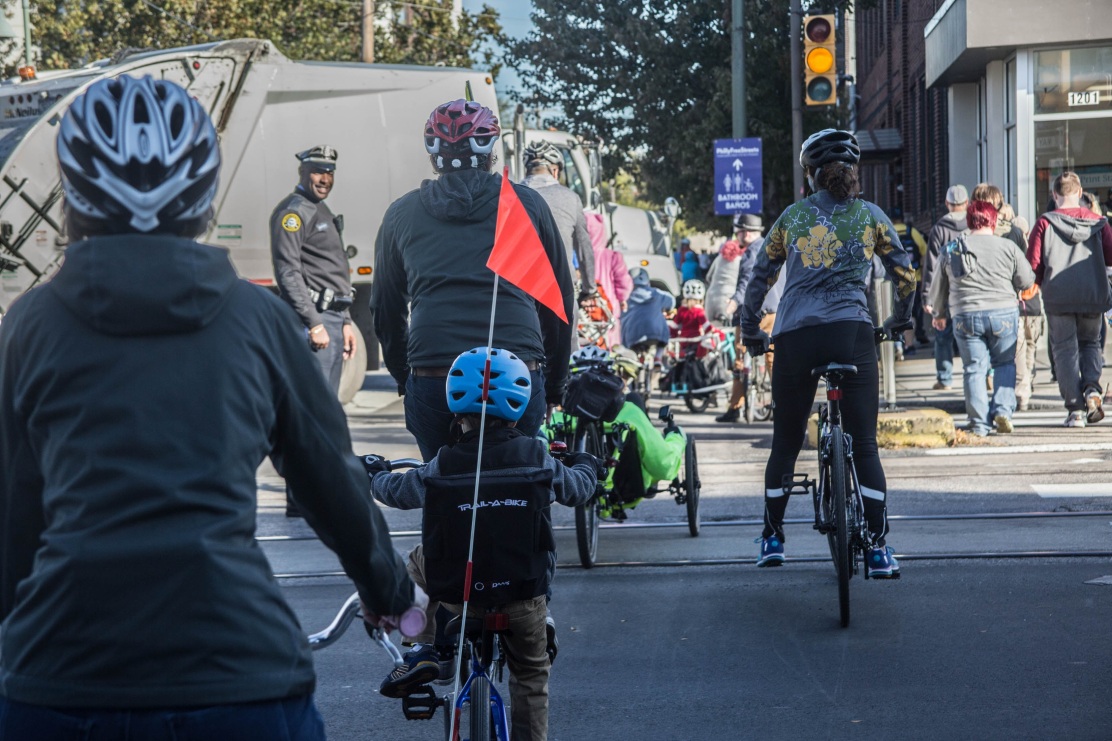 At several intersections, Philadelphia Police, who Driscoll said have to be specially requested for events like these, stood idle or sat in their cars. At other intersections, police showed more concern in stopping cyclists and pedestrians from crossing the street than in controlling motor traffic.

“We could ask the police to come out and direct these crossings, but they do not” said Driscoll. 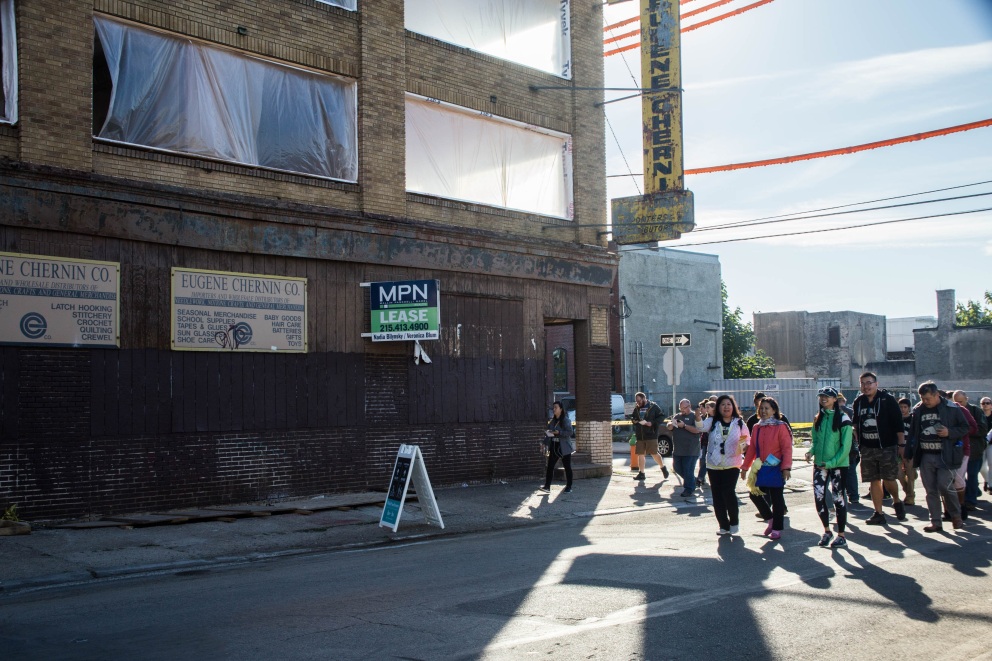 The transition from this 1900 photo of Broad Street to today’s Philadelphia was not a smooth or unchallenged one:

Historian Peter Norton, author of Fighting Traffic points out that throughout the U.S., people who were used to their streets being public space took the influx of speeding cars as an unwelcome presence, and fought to preserve what they had previously taken for granted. An automobile industry lobbying group called Motordom pushed for the creation of laws regulating “jaywalking”.

Norton explains that a “jay” was a person from the country, the type of person who might stare up at the buildings amazed, unaccustomed to city life. “Jaywalkers”, as the industry group defined them, were those who were lazy about keeping aware of their surroundings. It placed the blame for traffic violence on the pedestrian.

And even at this pedestrian- and bike-centric event, that was where the Philadelphia Police Department sometimes seemed to place the blame as well.

“Hey! Hey!” cried an officer, her voice strained as she waved at cyclists and runners already halfway across Market Street. “The light changed. You have to wait your turn!” 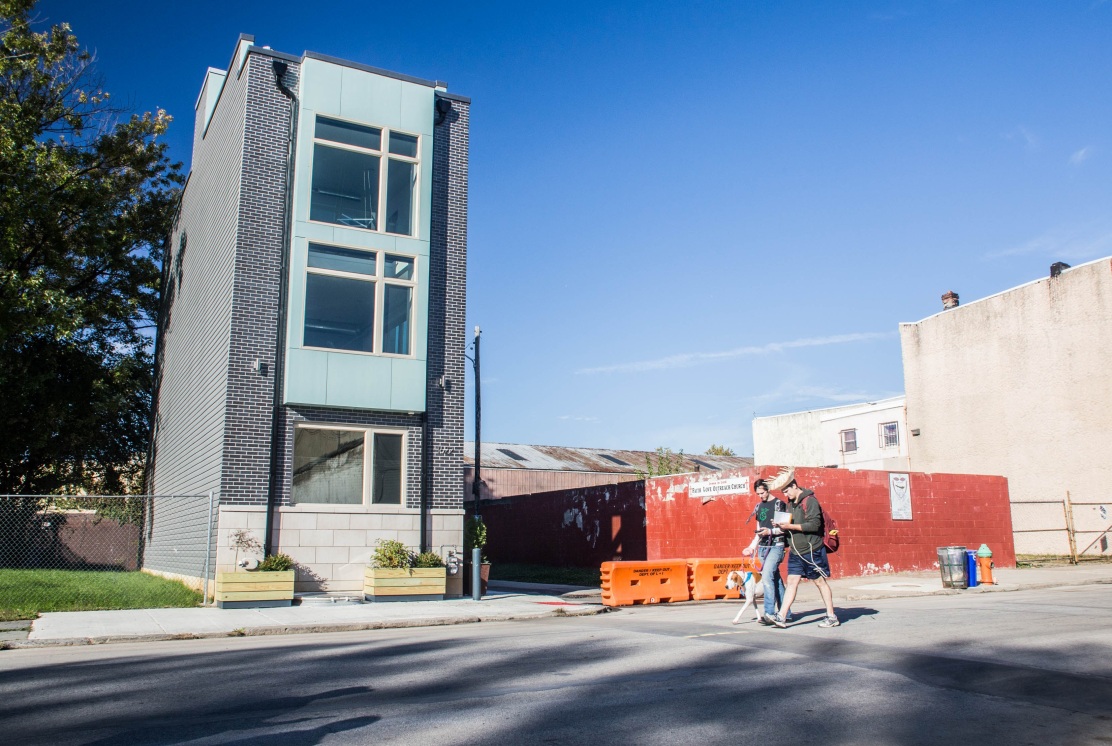 The movement to free the streets in Philadelphia is late to arrive. In the 1970s, as an oil crisis pushed the economy and concerns about mounting traffic deaths birthed the Stop de Kindermoord (Stop the Child Murder) movement in the Netherlands, Dutch politicians responded to public pressure and created some of the first experiments in bike-centric and pedestrian-centric streets, including Car Free Sundays. 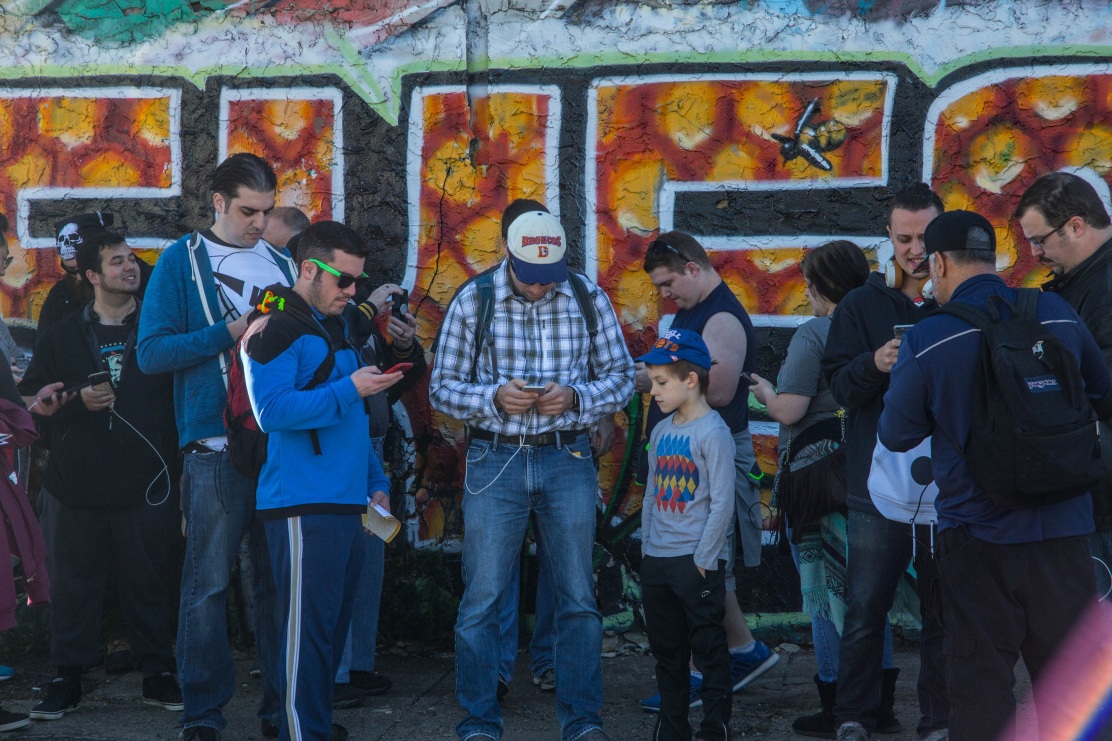 As in Philadelphia, those changes were hotly contested and succeeded due to confrontational activism. Moms had a big role in the changes. Maartje van Putten, a lead organizer of the 1972 Stop de Kindermoord protests, described for the BBC how her efforts were aided by the oil-crisis-induced Car Free Sundays of 1973:

We said those days are our days! We take the street back into our hands. So we rode from the centre of the city to Amsterdam North and there is this tunnel. People were already angry in those days that when the tunnel was built it was only built for cars and not for bikes: there was no bike path through the tunnel. So we said: “Okay, now we go through the tunnel!” I have to say it was a little bit dangerous, because there was still some traffic around like ambulances and police cars and the fire brigade and some people who had permission, for example doctors going to hospitals and so on. So we went with a group of parents on our bikes, kids on them, singing through the tunnel. Then at the end of the tunnel we were confronted with police cars that stopped us. The kids were taken in the police cars and our bikes, and we as well. The police took us and said: “You were a bit irresponsible doing this as young parents!” and of course they were right! But it was at the same time fun and nothing happened. 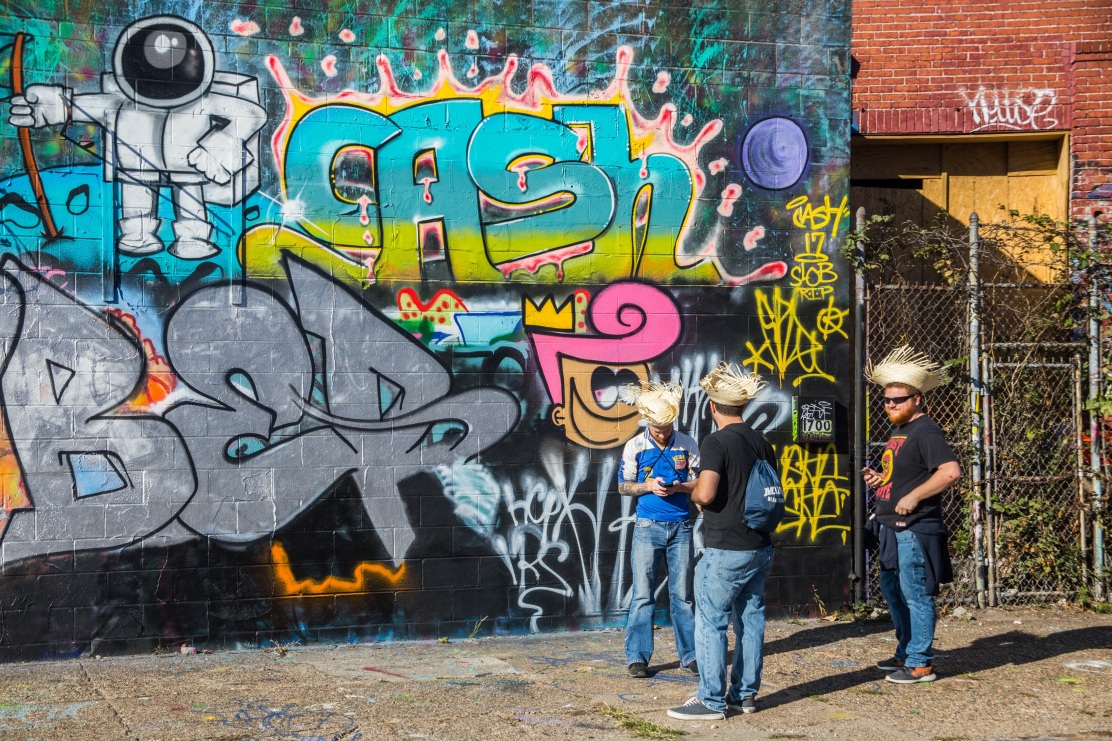 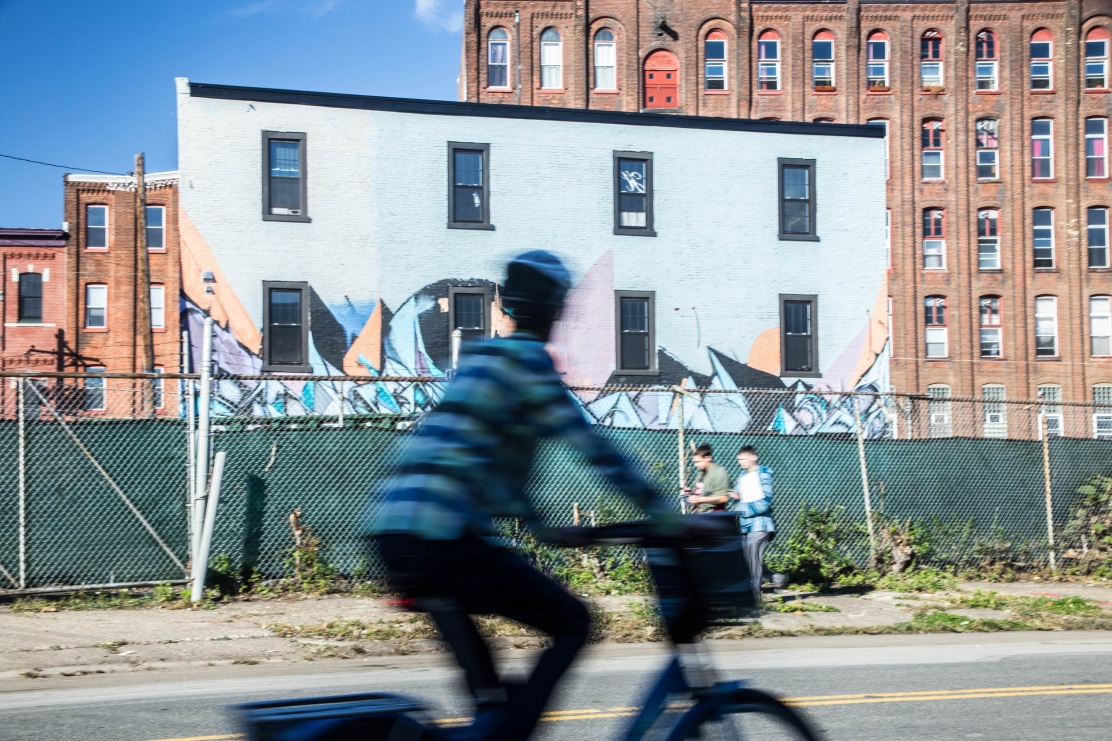 Driscoll wants the child murder to end too, and has gotten backlash for it.

“Last year when I was here, you should have heard the people screeching that my kids need to wear a helmet in the bakfiets,” said Driscoll, referring to the short “bucket bike” that she was pedaling Milo and Juniper around in. 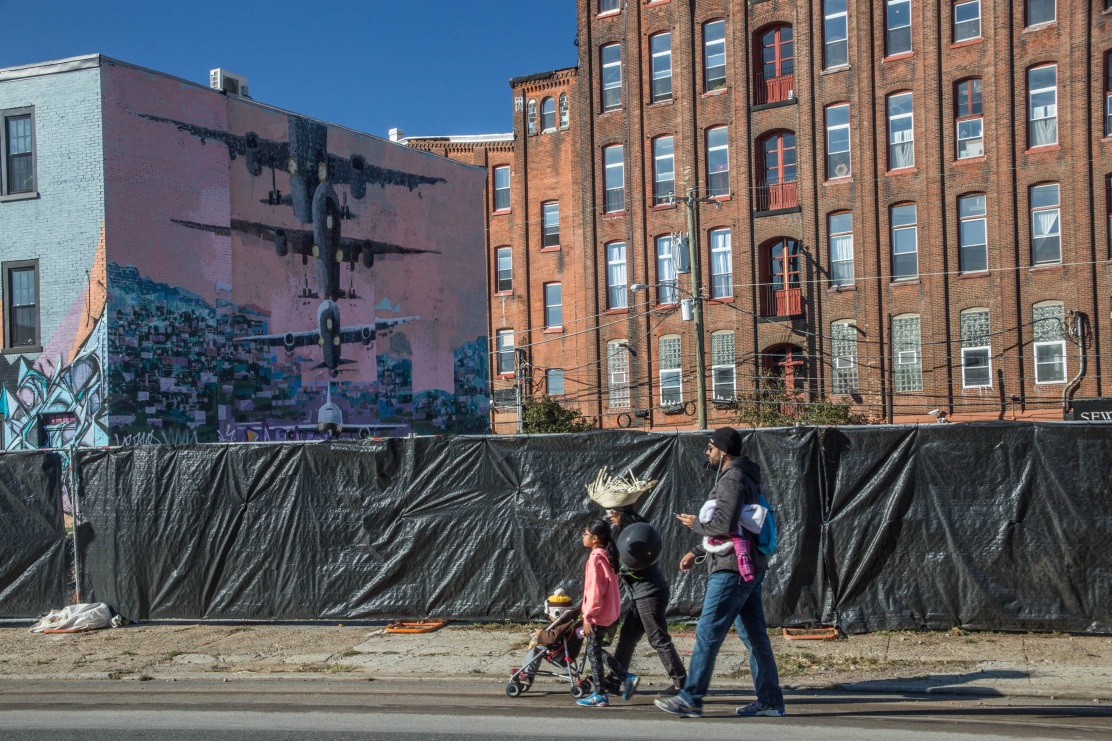 “I get it from people even on the Schuylkill River Path. It gets to a point where it’s about just fitting in socially” said Driscoll.

“The kids will say, ‘Mom, we need to wear a helmet for safety’ and I’ll say, ‘Alright, whatever makes you feel good.’” 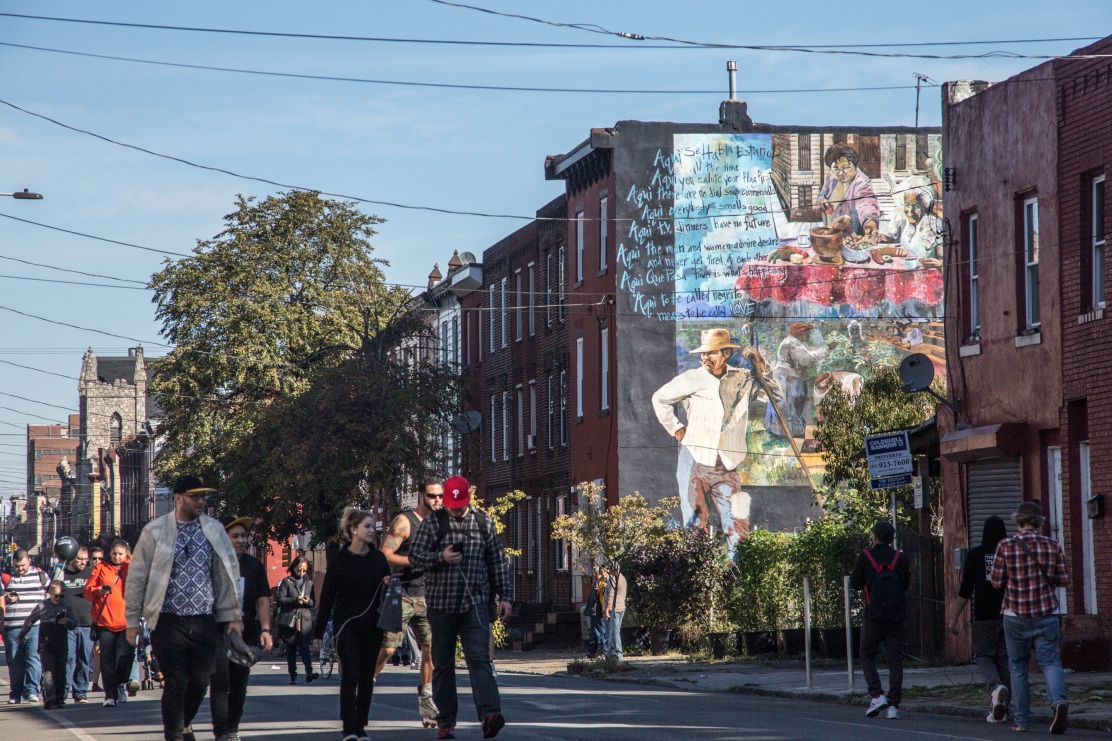 But Driscoll pointed out that in the Netherlands, children and adults alike bike without helmets, and have much lower injury and death rates than in the U.S., where mandatory helmet laws have sometimes killed successful bike advocacy efforts.

The Stop de Kindermoord movement started a trend in the Netherlands that brought death rates down more than 80%, while the U.S., once a leader in traffic safety, saw its rates fall by half that rate, according to a 2014 National Institutes of Health report.

Meanwhile, U.S. deaths are back on the rise in recent years, bucking a previous trend of decline. Not since the 1960s has such a surge of deaths happened in the United States.

“People say that I’m irresponsible for biking with my kids at all,” Driscoll added.

Tactical urbanism is the name planners assign to temporary events that change the character of a street, comes in many forms. One of the questions that can be asked about a tactical project is whether it mirrors something that could be permanent, or whether it merely creates a fun diversion for the day. Both have their place, but the former is important for a city attempting to solve traffic deaths and climate change.

The Declaration asked Driscoll if she felt, as a mother, that the city was doing enough with an event like Free Streets to show what is possible.

“Definitely not. The rate of change is way too slow. As a mother of two children, I want the city to be safer, but that is not happening.”