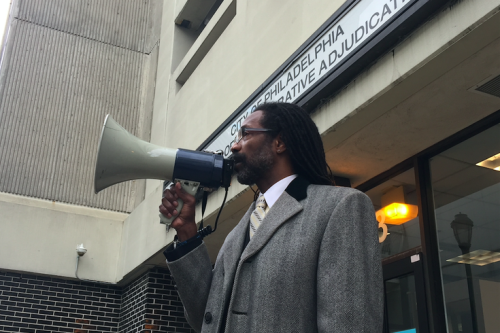 Philadelphia is at its worst a deeply divided city. Those divisions usually track along race and class, with predictable politicized results.

Michael Coard’s lawsuit against the Philadelphia Parking Authority is a fascinating counter-display, demonstrating how our parking wars can make strange bedfellows of a radical attorney and the most conservative forces in city politics.

Coard’s work as a capital defense attorney and public advocate for criminal justice reform and against the death penalty often place him at odds with the city’s white conservative neighborhoods.

His stance on parking, however, might get him a statue built to his honor on South Broad Street.

Unfortunately his position is wrong. Attacking the PPA might be Coard’s most popular stance ever, but is one that threatens to worsen segregation, housing unaffordability, climate change, and disability access.

Meme posted by Michael Coard on his anti-PPA Facebook page.

Coard’s lawsuit against the Philadelphia Parking Authority, disputing a $51 parking ticket for allegedly parking in a bus zone, was decided in his favor last year. As reported by Brian Hickey at The Philadelphia Voice, the central legal issue comes down to whether the no parking zone begins at the sign announcing it, or at the edge of the painted line.

The PPA is appealing the ruling in favor of Coard, claiming that the law clearly states that the sign marks the territory in which cars are not allowed. It’s a dry — some might say boring — legal issue, but as Hickey points out, a successful PPA appeal could save the agency from millions of dollars in refunds to drivers who strayed past the no parking sign.

Coard promises to file a class action lawsuit to get the millions of dollars if he prevails.

Why This Really Matters

Coard did not reply directly to my requests for comment for this article. In earlier tweets, he did direct this author to his Facebook page, “Antiparkingauthority”. There, one can see laid out a vision for abolition of the PPA and numerous populist appeals to the idea that the PPA is stealing from beleaguered Philadelphia drivers.

As a transportation policy advocate, I know the opposite is true: drivers under-pay by any measure for the cost of parking, roads, and other costs of driving. An estimate by economist Joe Cortright puts the average number at $1,100 of under-payment per vehicle per year (it varies in practice based on how much a person drives).

These costs don’t go away of course. The insidious thing is that they are passed on to us through virtually every other purchase we make; drivers, like everyone, pay for them with grocery money, increased rent, lower wages, or higher taxes. The policy of subsidizing cars means that people without cars — who are disproportionately poor and of-color — pay the difference for those who are subsidized.

Parking is at the center of many of these subsidies.

The average cost of a parking spot in the United States is $15,000, though in urban areas like Philadelphia that cost regularly jumps as high as six figures, and in extreme cases there are reports of the million dollar parking space.

Advocates for affordable housing in Philadelphia have made a vocal case about this inequity as those issues have crystallized around Council President Darrell Clarke’s proposal to double parking minimums in the city’s zoning code.

Reform Needed at the PPA

Which brings us back to the case against the PPA, and its recent appeal.

Coard’s promise to abolish to PPA comes amidst credible reasons to doubt the agency’s leadership. Numerous reports over the years have pointed to the PPA as a graft funnel first for the Democratic Party and more recently for the Republican one.

The failure of the agency to deal efficaciously with public doubts about its use of money make it a hard client for which to advocate.

Certainly, among the “Shoupista” advocates for parking policy, one of the core tenets would be having agency reform that assures that local businesses and residents are given control over parking revenue instead of insiders.

Successful parking policies have raised (or sometimes lowered) the price of street parking to meet demand, and used the revenue to lower taxes, improve sidewalks, plant trees, or otherwise benefit the blocks on which cars are parked. Graft defeats this option by destroying the necessary trust.

PPA could also improve its credibility by making its ticketing practices more accountable.

A 2011 lawsuit against the PPA and its sister agency the Bureau of Administrative Adjudication resulted in a ruling ordering the PPA to adopt fairer practices in writing tickets, but as of 2015, The Declaration reported that the old unfair ticketing practices remained largely the same.

Providing more due process — which in the modern age of smartphones, could often be as simple as snapping a picture of the vehicle and its surroundings — would go along way to making the PPA a better vehicle for sound parking policies.

Finally, some argue that parking tickets are regressive, and though there are lots of reasons to disagree with this stance, there’s a case to be made for pricing tickets differently. In Finland, fines for motorist tickets are tiered according to income, meaning that a wealthy person getting a ticket for speeding could face a six-figure penalty. For Philadelphians who feel that parking or moving violation tickets are regressive, a push to make fines progressive would be an appropriate remedy.

Throughout it, the dry issue of whether Coard’s car was parked in or out of the bus zone gets less attention than a general stoking of driver aggrievement over the theft of having to pay for parking and parking tickets. This is problematic for all of the affordable housing, climate, and disability access reasons mentioned.

And it puts Coard in strange company.

The advocacy group 5th Square has been one of the few in the city willing to fight for good parking policy.

This year it sued the City of Philadelphia over its refusal to enforce parking policy on the Broad Street median. In a recent loss, 5th Square had its suit against Philadelphia thrown out for standing: Philadelphia officials successfully argued that the advocacy group had nothing to individually gain or lose in the city’s arbitrary enforcement of parking policy.

The failure of courts to uphold the law — parking on the median is actually illegal, and everyone agrees — has real policy implications. As residents concerned with pedestrian and bicycle safety and climate change attempt to make streets safer for non-motorized traffic, the continued use of every last inch of pavement for parked cars stands in the way.

Philadelphia has, among large cities, one of the worst records for pedestrian and bicyclist safety, despite the fact that it is also the #1 large city for bicycling and one of the top pedestrian cities in the country in terms of numbers of people who use those modes.

The injury and death toll for pedestrians and cyclists — who are disproportionately low income and of color — tracks depressingly along inequitable lines. 5th Square argued that these policy implications mattered, but was overruled. The parked cars won, and the Rizzo-statue-lovers cheered.

Coard’s suit against the PPA reads as an odd-bedfellows moment with the South Philadelphia residents who might normally throw tomatoes at him for his civil rights work.

Fighting for an auto-centric Philadelphia is a cause celebre for the same conservative Philadelphians who constantly fight change on every other progressive front. Coard is closer to Jody Della Barba, who loves Frank Rizzo and hates bike lanes, than to many of the city’s progressives on parking.

A Voice for Justice

Coard himself is aware that wider advocacy matters.

In Hickey’s account of the hearing, Coard chides the PPA for taking an “advocacy position” in lieu of a clear legal finding: the agency pointed out that Coard’s parking job could have made it hard for disabled people to load and unload from the bus.

But Coard has also concluded from his own experience as a capital defense lawyer that when the law isn’t actually on his side, he too is willing to advocate instead for what he thinks policy should be.

Ironically, this is the Michael Coard Philadelphians love (as many to the left do) or love-to-hate (as many conservatives do): a man who understands that the law is often written by and for the powerful; whose lawyering is as much about breaking down what’s wrong with the law as it is about standing by the letter of it; whose efforts on behalf of the disempowered have breathed life into numerous movements for justice across the City of Brotherly Love.

The dry legal issue — is it the paint or the sign that marks the bus stop? — is rather uninteresting, and this author has no judgement on the merits. But the broader social implication of the entire endeavor is huge.

It’s not fair to blame Michael Coard for having the same blindspot about policy that every driver in the Delaware Valley has. But as a person who shapes his legacy around justice, what will he do with the new information he’s been presented with? Will he fight to truly reform the PPA? Or will he become a false populist, spreading the Gospel of Free Parking?