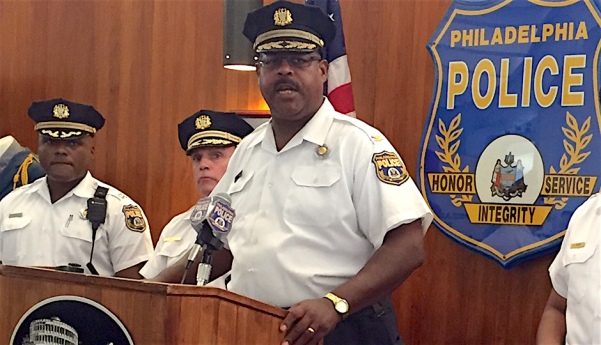 By Austin Nolen and Merry Reed

From 2005 until the end of 2017, the City of Philadelphia paid at least $1,799,000 to settle lawsuits claiming sexual misconduct by its employees. The majority of those payments were made to settle claims against police officers by other officers or by civilians.

According to data released by the City Law Department to The Declaration, payments to settle sexual misconduct claims against police officers during that period made up 57% of the total number of sexual misconduct settlements.

During the same period, the monetary value of payments to plaintiffs against the police added up to 87% of all such sexual misconduct claims. 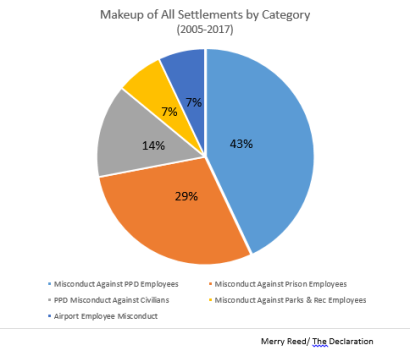 The large figure of payouts to plaintiffs against police officers is largely the result of the settlement the City entered into with Michelle Vandegrift. As The Declaration first reported, Vandegrift received over one million dollars to dismiss her claims.

In her lawsuit, Vandegrift alleged that she was subjected to a hostile work environment by her fellow officers, and that she was sexually assaulted in 2007 by Chief Inspector Carl Holmes, a commander with a long disciplinary history.

In that same time span, the City also settled seven other cases alleging sexual misconduct by police officers. Of these seven cases, two plaintiffs were civilians who alleged that they were sexually abused or assaulted by police.

In 2012, the City paid Dagma Rodriguez $77,500 to settle her claims that she was assaulted during a narcotics raid by police officer Thomas Tolstoy. Tolstoy, whose alleged assault of Rodriguez was featured in the Tainted Justice series, still works as a police officer.

Rodriguez also claimed that the other officers in Tolstoy’s squad in the Narcotics Field Unit knew about his abuse and failed to stop him. Many of those officers, including Jeffrey Cujdik, are also still employed by the Police Department.

In 2014, a young man received a $20,000 settlement after filing a lawsuit which alleged that, when he was a minor, police officer Adrian Makuch had stalked and propositioned him. The man also alleged that other police officers covered for Makuch’s conduct

Makuch was later convicted of sex crimes against other children and is no longer employed by the police force.

The other five accusations against police officers were all made by their fellow employees. One female police trainee alleged that a fellow recruit, Adam Chaykin, harassed, stalked and drugged her.

According to the suit, she collapsed as a result of the drugging and was transported to the hospital.

She alleged that Chaykin gave her mouth-to-mouth on the way to the hospital, even though he did not know how to perform CPR. She later dropped out of the Police Academy due to the stress caused by Chaykin’s alleged harassment.

Like nearly every other plaintiff, the female trainee also alleged that superior officers either covered for the harasser or failed to take action.

Her supervisor at the time, then-Sergeant Sekou Kinebrew, has since been promoted to Captain and now leads the Police Department’s Public Affairs office.

According to the data, the majority of the remaining settlements stemmed from harassment of prison employees by other workers or supervisors.

The four prison harassment settlements in that time period, compared to eight police settlements for officers and civilians, added up to 29% of the total number of settlements and 10% of their monetary value.

Two other payments, amounting to 14% of total settlements and 2% of total monetary value, round out the Law Department data.

One lawsuit alleged that a supervisor in the Parks and Recreation Department harassed and groped two female subordinates. And an airport worker claimed supervisors retaliated against her for reporting harassment by a colleague.

According to city attorneys, it is possible that a small number of additional harassment cases could have been settled from other city funds.