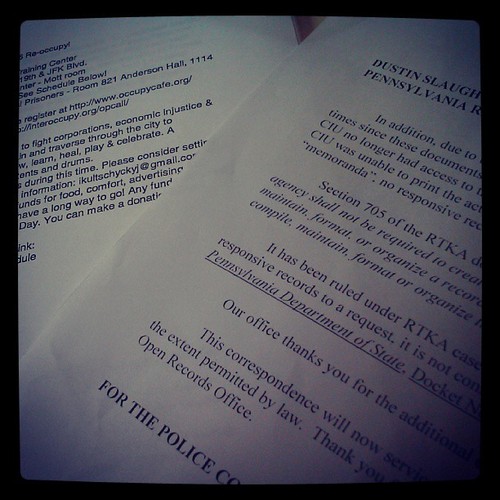 Over one week ago, I received the first document release from a series of Right-to-Know requests I’ve filed this year. This request, which encompassed a time period from April 1st to May 2nd, 2012, sought any and all “meeting minutes, memoranda, and emails” regarding Philadelphia Police Department surveillance regarding Occupy Philadelphia’s 2012 May Day activities.

Surveillance of activity ranged from protests at Temple University demanding union jobs to Occupy Philadelphia’s April 6th “Spring Training” and temporary occupation at Independence Mall, and of course announcements of May Day activities.

While the documents offer a glimpse of what is apparently widespread law enforcement monitoring of a broad swath of First Amendment-protected activity in Philadelphia, it also leaves more questions unanswered.

The release contains a total of 42 pages that include “all attachments emailed by the Criminal Intelligence Unit regarding Occupy Philadelphia from April 1, 2012 through May 2, 2012,” according to a cover letter [emphasis mine].

The letter also offers an explanation for why the actual emails weren’t released:

Due to the Criminal Intelligence Unit’s headquarters being relocated two (2) times since these documents were originally emailed, and the most recent move to the DVIC (Delaware Valley Intelligence Center), CIU no longer had access to the Lotus Notes application used to send these emails. As a result, CIU was unable to print the actual copies of the emails.

Email metadata is just as important, if not more so, than the content of the emails – just ask the National Security Agency. Metadata, such as email headers, provide valuable information about agencies the CID might be coordinating with, obviously providing new avenues of investigation in order to gain a larger picture of Philly’s own version of the “architecture of oppression.”

In other words, very important details are missing.

Just as importantly, there is no way to ascertain the Department’s posture and attitude toward events cited in these attachments: did police prioritize protests at financial institutions over other demonstrations, and what was law enforcement’s relationship with corporate entities? How did the Department coordinate with federal park police at Independence Mall during Occupy’s “Spring Training” in April?

Next steps: if the police department is able to – allegedly – lose emails so easily, it would be useful to know their data retention policies. And if they indeed lost these emails, what does this say about their handling of potentially sensitive information in general?

As a side note, I anticipate another release on or before September 9th regarding a request for the CID’s “White Paper on [Occupy] National Gathering.”