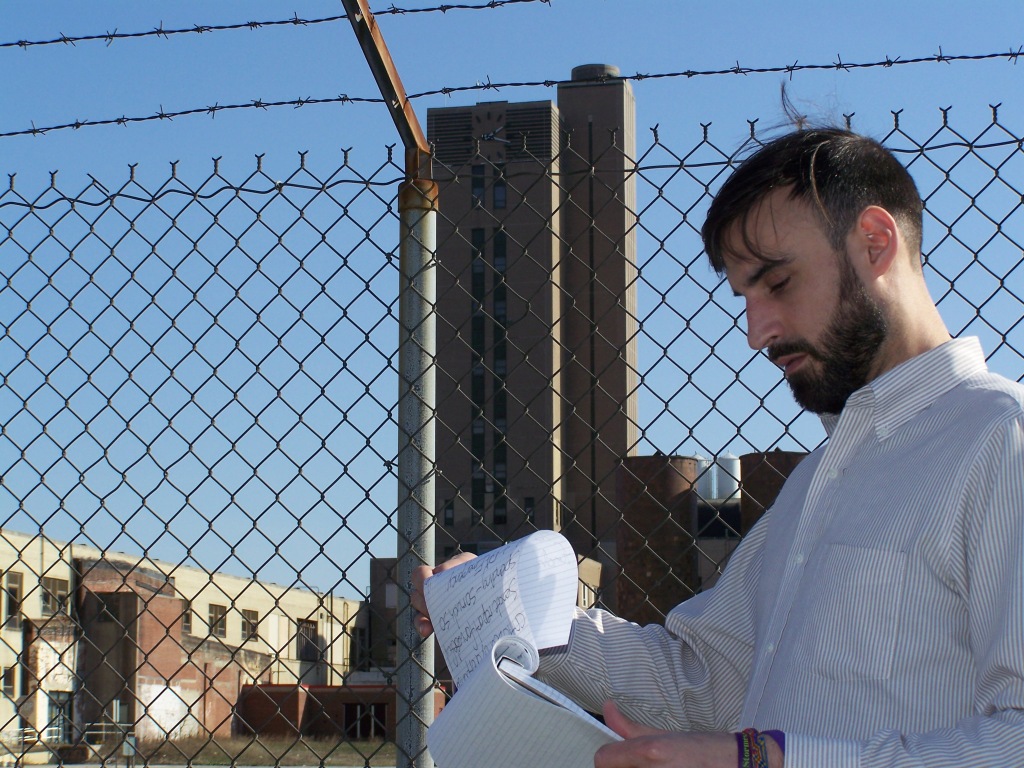 Nikki Allen Poe looks at notes about the DVIC fusion center during an informal walk around the facility.

by Kenneth Lipp and Dustin Slaughter

Full disclosure: Kenneth Lipp is serving as Mr. Poe’s campaign advisor. Dustin Slaughter was asked by Poe’s campaign to serve as a consultant on matters concerning the fusion center, which to our delight Poe decided to include on his platform. As such, we welcome and even encourage criticism of material and statements this publication will make. In the end, we strongly believe that journalism should not only hold power to account, in whatever way it can, but should not shy from a role in shaping public policy, or shrink from bias rooted in the facts as they present themselves.

City Council candidate Nikki Allen Poe will hold a press conference tomorrow at 6:30 pm outside Philadelphia’s surveillance boondoggle, the Delaware Valley Intelligence Center, to address a number of issues that touch on personal political beliefs and convictions we feel very strongly about: our city’s public school evisceration; the disproportionate impact that law enforcement policies and activities (including the fusion center’s operations) have on low income communities and people of color; civil liberties and privacy;  and last but certainly not least, political corruption and deceit.

It is for these reasons that The Declaration fully endorses Nikki Allen Poe for councilman-at-large. Here’s why:

His decision, at the urging of manager Kenneth Lipp, to make the fusion center an issue in the campaign is very exciting, because this facility is a focal point and even metaphor of sorts, for a multitude of dire challenges Philadelphia faces.

The Delaware Valley Intelligence Center has a shadowy, corrupt, and expensive past: plagued with delays for over seven years while costing tens of millions of dollars in federal and local money; criticized for wasteful spending by a bi-partisan Senate committee before it even became operational; dubious Homeland Security grant funding shenanigans and clear conflicts of interest, which led our state’s Emergency Management Agency to halt funding during development in 2011; and serious questions regarding this facility’s ability to adhere to privacy regulations and aid public safety, which the Nutter administration has assured the public and press are occurring.

The truth of the matter is that this scandal-ridden project is a political boon for Nutter, because it allows him to look tough on crime, trumpet “smart policing”, and beef up the outcome of future political ambitions, while costing Philadelphia taxpayers over $1 million per year. Our city’s children lack fundamentals to ensure academic success, including overcrowded and unsafe public schools, all while odious “national security” contractors line their pockets and poorer neighborhoods bear the brunt of police repression, thanks in part to intense surveillance by a preponderance of police cameras that continuously feed into the Center.

None of this palatable.

It is long past time for a dark horse candidate to change the conversation in this city. Just as importantly, his skeletons are already out of the closet. Can other candidates in this race say the same? Are they talking about these issues? They don’t have to, because their council seat is almost assuredly waiting for them.