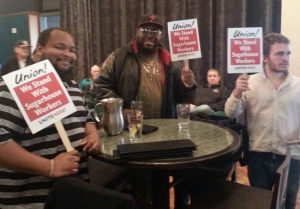 An April 2, 2014 “Sip In” held by union organizers at Sugar House casino. Photo by Jini Kades

Jared Shelley wrote for the Philadelphia Business Journal yesterday about a complaint filed in November with the US National Labor Review Board, on behalf of employees at Sugar House in Philadelphia who are members of the Unite Here Local 54  union committee. The complaint alleges that the casino management used video surveillance equipment and security personnel to keep tabs on the activities of a group Sugar House employees who have been trying to organize at the casino.

Unite Here 54, which represents workers within the casinos of Atlantic City and South Jersey, and local activists have been attempting to unionize Sugar House employees since shortly after legalized gambling came to Philadelphia in 2007. Harrah’s, in Chester, is the only unionized casino in the area.

The substance of the complaint, the full text of which is embedded below, alleges that “beginning on or around August 2011 until on or around August 2014 [the Sugar House instructed] its security officers to engage in surveillance of Union committee persons while they were working and while they were not working. The security officers did in fact engage in such surveillance.”

The casino has denied the allegation, reports the Journal.