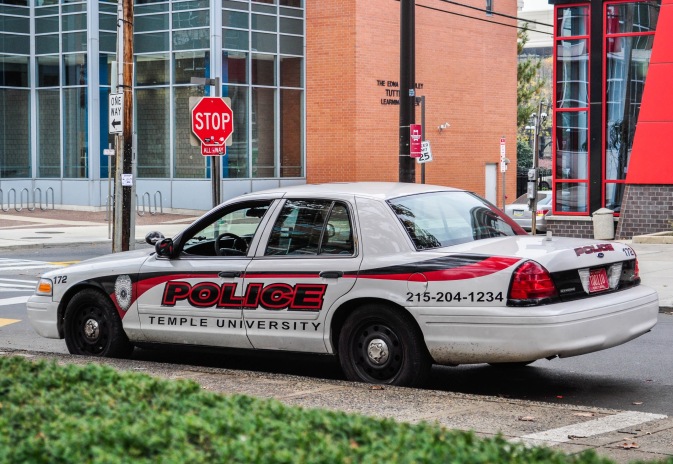 Temple University’s police force says they are reforming a range of policies in the wake of high profile police shootings. They’re also moving towards greater cooperation with the Philadelphia Police Department’s fusion center.

State law allows Temple, a state-related university, to appoint private police with all the powers of certified Pennsylvania police and the authority to use those powers “on… or within 500 yards” of its grounds.

A Department of Justice report in 2015 indicated that 91 percent of public universities employ sworn police officers, versus 36 percent of private institutions.

“But we’re nowhere near like a military,” he clarified. “There are open doors. Do we have weapons? Yes, you see the guns on us. We have rifles and patrol cars, but you won’t see us with tanks and robots and stuff.”

Police and security personnel conduct bike and foot patrols on and off campus. The patrol boundaries now run west toward 18th Street and east to 9th Street between Susquehanna Avenue and Jefferson Street.

Temple extended its patrol area further off-campus after neighboring teenagers attacked a student and her boyfriend in 2014. The university enhanced and updated campus safety measures after the incident, including its 40-year-old security system.

A four-person team now runs a computerized dispatch system, which receives live video from over 600 on-campus cameras. It also facilitates communication between Campus Safety and the Philadelphia Police Department.

Leone attends weekly meetings with special detectives from the 6th and 9th Districts of Philadelphia Police and Central Division to review crime data and department-wide protocol.

Temple police mainly collaborate with 22nd District police, whose dispatch system is directly linked to theirs. Leone said Campus Safety monitors all 9-1-1 calls made within several blocks of their patrol borders and responds to any priority calls.

The Delaware Valley Intelligence Center, which operates under the auspices of the Philadelphia Police Department, provides Temple police with real-time crime data. Leone says campus public safety officials also receive regular updates from an FBI liaison and have similar contact with other federal agencies like the ATF.

Leone said that his office also looks to the 22nd District as a model for police reform, having “tested the waters” as the host site for the PPD’s body-worn camera pilot program.

He claimed his office is remodeling itself on the findings from President Obama’s policing reform initiative, co-chaired by former Philadelphia police commissioner Charles Ramsey.

Temple will receive a mock review from the Commission on Accreditation for Law Enforcement Agencies in February. CALEA is a board of 21 members from local, state, and international law enforcement, business, academic, judicial, and government organizations that accredits police departments that update public safety standards and initiatives.

Leone claims he has seen a decrease in the use of force by Temple police, attributing this success to a shooting simulator from TI Training, a producer of “industry leading” use-of-force training hardware and software. He argues it can “reprogram” officers prone to acting on race and gender biases in high-pressure, potentially deadly situations.

“Officers who go through this training are starting to recognize how to deescalate, how to get people where they truly need to be, and that’s not behind bars,” explained Leone.

“We have a lot of people with mental health issues wandering through Philadelphia and the perception is that they’re a criminal, but they’re really not.”

Leone said the accreditation process will begin this February and take three to four months. If Temple passes, his office will receive a full report and subsequent certification. He also wants to publicize a full list of general orders online once Temple earns accreditation, and agreed to continue discussing the process with The Declaration.

Correction: The original version of this article cited the incorrect law for Temple’s authorization to appoint police. The correct statute, which is now cited above, governs police at state-related universities such as Temple and state-aided universities. Purely private universities are governed by the original law cited.