Protesters marched through several Philadelphia neighborhoods on the night of November 24th and into the early morning hours of the 25th. Photo: Joshua Albert

For several hours on Monday night and into Tuesday morning, a group of several hundred protesters – police estimate approximately 200, although the demonstration certainly totaled much more than this – marched through the streets in and around Center City Philadelphia. The two different marches, which had been organized ahead of time by an interfaith group and a coalition of community and socialist groups, respectively, were expressing condemnation of the decision by a St. Louis County (MO) grand jury not to indict Ferguson police officer Darren Wilson for the August shooting of Michael Brown (the Grand Jury testimony is available in full below). 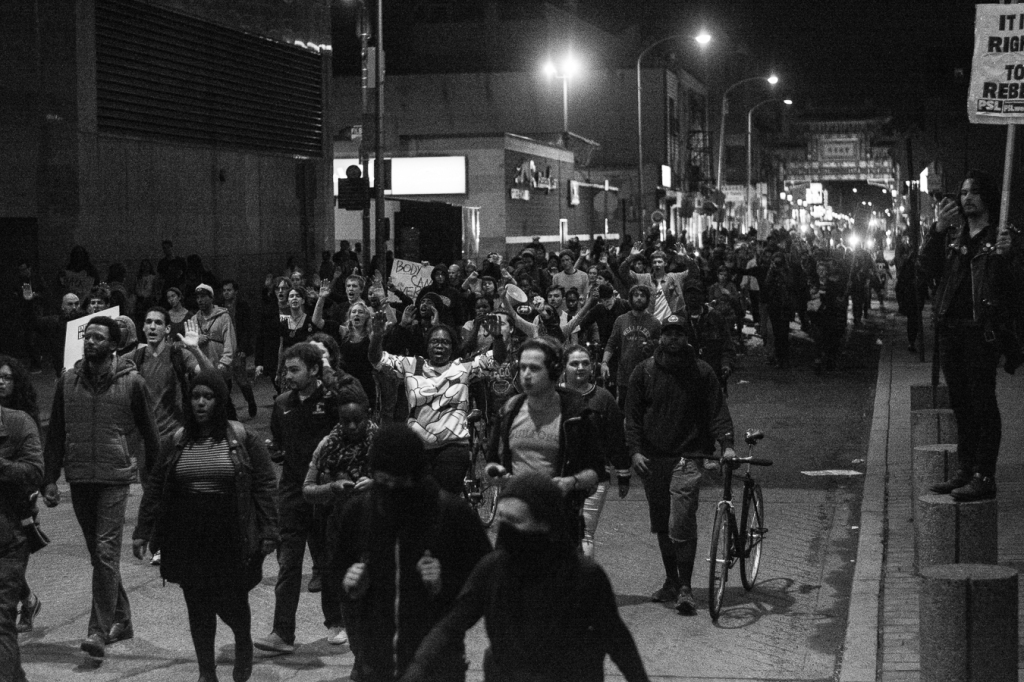 As the announcement of the decision neared, the interfaith group gathered in a nearby church as the other group of protesters took up space on the new Dilworth Park in front of City Hall. After growing significantly, the City Hall protesters began their march at around 9:30 pm, taking a loop around Center City, all the while being pushed into one turn after another by bike police and cop cars, some of which had been staged away from the park, out of site of the protesters. After being joined by the interfaith marchers, the now united march arrived back at the starting point.

Just as the march was beginning a second, longer loop, Philadelphia Mayor Michael Nutter provided the other response to the events in Ferguson for the night: he expressed support for the peaceful protests in the city and for the police department, who, he said, helped make the peaceful nature possible. He also criticized Ferguson police and other St. Louis area law enforcement for mishandling many aspects of Brown’s shooting, and said that he still thinks there are important questions to be answered.

The protests, however, grew tense soon after the mayor praised police and protesters alike for their restraint. Protesters tried three times to reach I-95, and were stopped each time, with varying degrees of success, by police. During one attempt, police allege two protesters actually reached the highway, knelt down and were promptly arrested. After these attempts, the march completed the second loop, with no more arrests but a few tense moments along the way. Upon nearing City Hall, the crowd slowly began to disperse, though not before an announcement was made that another march would be meeting at the same place at 5pm the next day, in addition to other protests planned later today in the city. 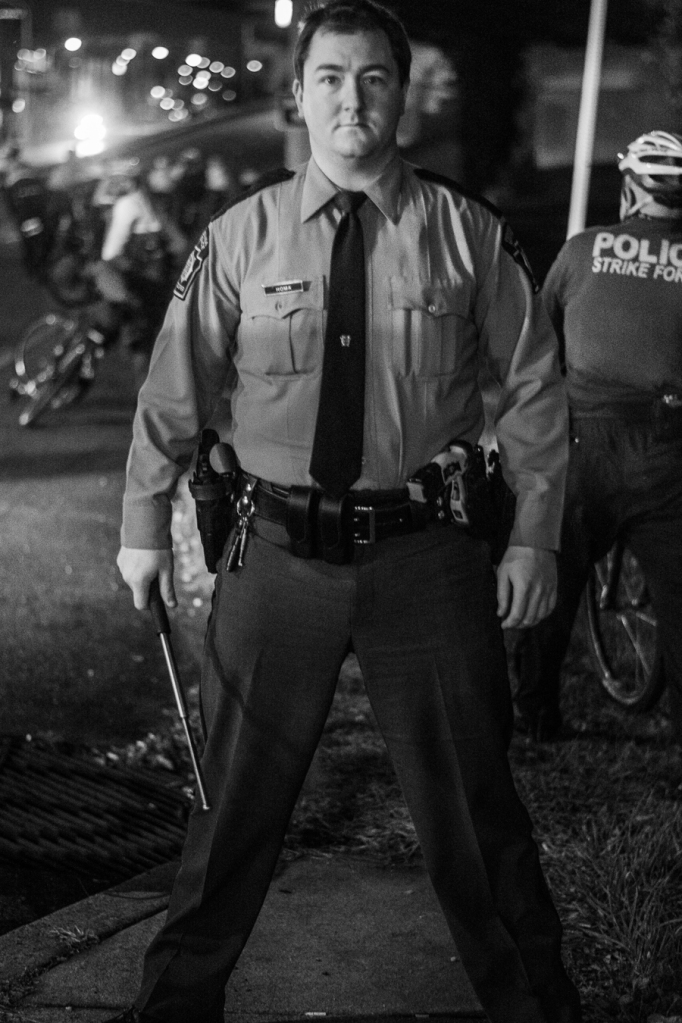 A PA State Police trooper, along with other law enforcement, blocks the entrance to I-95 last night. Photo: Joshua Albert

In spite of occasional lapses, the police response was generally well-organized and clearly pre-planned. A police source told The Declaration, however, that this planning went no further than the Philadelphia area; unlike the case of Occupy, the source claimed, no national coordination had taken place about how to best deal with the expected national day(s) of protest.

We will be filing requests for the plan the police relied on in handling the protesters, and will publish a follow-up story on the plan itself if it contains information that warrants it.